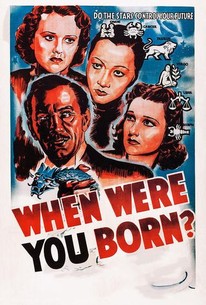 When Were You Born? Photos

Astrology and murder meet head-on in the Warner Bros. programmer When Were You Born? When horoscope specialist Mary Lee Liang (Anna May Wong) predicts the death of importer Philip Corey (James Stephenson), her prophecy comes true in a surprisingly short time thanks to a mysterious killer. Mary then assists the police in their investigation of Corey's murder, using her knowledge of the zodiac to draw up a psychological profile of the culprit. Could the guilty party be Nina Kenton (Lola Lane), the dead man's sweetheart? Is it Fred Gow (Leonard Mudie), Corey's duplicitous partner? Or maybe it's Doris Kane (Margaret Lindsay), who halfway through the proceedings is revealed to be the victim's secret fiancee. The most novel aspect of When Were You Born? is its opening credits sequence, wherein the actors are billed in the order of their astrological signs rather than their importance.

Critic Reviews for When Were You Born?

It consists merely of using a routine murder mystery as a pretext for expounding the zodiacal rigmarole.

Action has been supplanted by long discourses on the merits of applying the science of astrology in solving murders; the over-abundance of dialogue becomes pretty tiresome.

There are no featured reviews for When Were You Born? at this time.

When Were You Born? Quotes