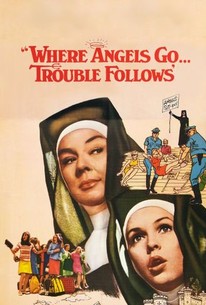 Having scored big in 1966 with The Trouble With Angels, Columbia Pictures went back for a second bite of the apple with Where Angels Go, Trouble Follows. But it's two years later, and the world of Catholic education depicted in the first movie is confronting a raft of changes on all sides, from within and without. And Mother Simplicia (Rosalind Russell) not only has a new generation of students headed for graduation, but a young, progressive nun, Sister George (Stella Stevens), with whom to lock horns. And if top hell-raisers Marvel Ann (Barbara Hunter) and Rosabelle (Susan Saint James) can't cause her enough headaches to keep her busy, then Sister George will come up with something to get under her skin. The girls' adventures take them cross-country to a Catholic-themed peace rally, on the way to which they encounter mechanical problems with their bus, leading to an overnight stay at a Catholic boys' school and an encounter with some surly bikers; an interlude at a ranch owned by a millionaire (Robert Taylor), and a gradual loosening of the attitudes by the tradition-bound Mother Simplicia.

Nothing much interesting or funny here.

Worse than the original. I watched cause I liked the original 60s hair and wardrobe. The music was especially horrid. I mean, really.