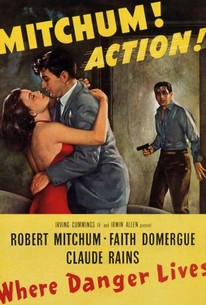 A disturbed woman allows her doctor to believe he has killed her husband (she was actually the culprit) and they go on the run together.

Maxine Gates
as Girl in Act

Gordon B. Clark
as Attendant

Frank Leyva
as Mexican
View All

News & Interviews for Where Danger Lives

View All Where Danger Lives News

Critic Reviews for Where Danger Lives

Audience Reviews for Where Danger Lives

A awesome film Noir with Robert Mitchum who plays a doctor who has fallen in love with a Dangerous women, who murders her husband. After the murder they head to Mexico trying to cover there tracks, 4 stars

Overwrought drama that was years in the making while Hughes was trying to make a star of the somnambulant Faith Domergue. Mitchum and Claude Rains are good but this is a turgid dull affair.

"where danger lives" is one of those rko film noir pieces robert mitchum had been tackling since the 40s after his legendary "out of the past". mitchum, as howard hughes' number one investment of superstars, was craving for better roles instead of the central criminal characters or hard-boiled detectives in most of his movies, so he attempted to demonstrate some diversity by playing a straitforward middle-classed doctor messed with luring but suspicious femme fatale. this time, mitchum is still the imperious man who fancies challengingly provocative woman despite she might detonate his doom, and he dives into the trap without hesitation jusy as he says in "out of the past"...."BABY, I DON'T CARE!" the first 20 mins of the film is mesmerizingly romantic on the affair between a doctor and lonesome beautiful woman with suicidal tendency. (impersonated by faith domergue, whose fickleness and angelic beauty rival jan greer in "out of the past")...then the gallant mitchum intends to rescue the wretched woman from her seemingly overbearing father(played by claude rains, a brief screen occurence.)....BUT the aging father turns out to be her husband, then the elder man dies of an accidental hit. after that, mitchum suffers from concussion, and these two flee to mexico. gradually, more dark secrets are discovered on the road. the whole movie might appear like a strip-tease which conceals the crucial details as foreshadowing then bares it all at once as gratitous treats to the audience. there's nothing too unique about it but it sticks to its noir patterns: seedy, shadowy cinematography, un-trustworthy attractive woman and gullible man who is trouble-magnet, then a gruesome twist in the end, so the audience is aware of what exactly to expect. somehow it does have the embellishment of desperado road movie in the paradise of outlaws, mexico. mitchum doesn't do chain-smoking as he does in "out of the past" but this movie lacks an emulating villain, and the 5 mins screen presence of claude rains doesn't make a competent impact like kirk douglas' whit in "out of the past", even though the woman is devious enough as the bait to man's self-ruin. but inevitably, this movie follows the cliche of saint/demon when it comes to romancing the women, mitchum re-embraces the bosom of the good-gal, maureen o'sullivan. and the metaphor is blatant: red rose for the stimulating bad girl, so the white rose would be the gentle woman who demurely always awaits her beloved man.

A couple of interesting things happened towards the end but otherwise it was really typical.