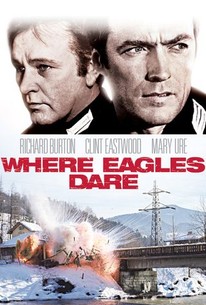 An expensive but enormously profitable war picture, Where Eagles Dare centers upon a daring rescue and even more daring escape. Disguised as Nazi officers, commandoes Maj. John Smith (Richard Burton), Lt. Morris Schaffer Clint Eastwood and six other courageous souls parachute behind enemy lines. Their mission: to rescue an American general, held captive in a supposedly impenetrable Alpine castle. Aiding and abetting the commandoes are Allied undercover agents Mary (Mary Ure) and Heidi (Ingrid Pitt). Also on hand is a British officer (Patrick Wymark), who masterminded the mission. Somewhere, somehow, someone amongst the Allies is going to turn out to be a traitor. There's also a neat plot twist in store when the commandoes manage to reach the American general -- which leads to yet another twist. The vertigo-inducing climax has made Where Eagles Dare one of the most sought-after of "early" Eastwood starring features. The film was written directly for the screen by espionage novelist Alistair MacLean. ~ Hal Erickson, Rovi

Critic Reviews for Where Eagles Dare

As with Kelly's Heroes, Where Eagles Dare pulls itself together best in its third act

It gets better, yields deeper layers of meaning, every time I see it.

Alistair MacLean wrote an original screenplay that was treated with respect for the writer's unusual abilities as a master of actionful suspense. The resulting film is highly entertaining, thrilling and rarely lets down for a moment.

It may be devoid of significance of any sort, but it is nevertheless passably entertaining, and certainly better viewing than most MacLean adaptations.

It is so long (almost three hours) that it may finally bore the very action trade for which it was intended; yet it's just at that point of surface boredom that the movie aficionado will probably become entranced.

You have to admire any film that casts Clint Eastwood opposite Richard Burton; the real violence is in the clash of acting styles.

The new Richard Burton-Clint Eastwood movie, Where Eagles Dare, manages to bore you to death and insult your intelligence at the same time.

A classic of its time, this riveting WWII drama is rife with great action sequences (the cable car!) and shock twists pulled out of thin air. Three escapist hours very well spent.

This is not a picture for sensible souls and rational minds, or for those who relish their peace and quiet. It is for children of all ages who enjoy oohing and aahing and baiting their breath and screaming and closing their eyes (but peeking through).

That I was able to enjoy this movie as much as I did, despite the plethora of plot holes, says something for it.

Hilarious and exciting, often at the same time.

...it provides full-on thrills, maybe exaggerated thrills, to be sure, but making for an exciting ride, nonetheless.

Audience Reviews for Where Eagles Dare

They sure knew how to make great WWII films back in the 1960's. So many classics from that era to love and remember. This highly suspenseful action-adventure, starring Richard Burton and Clint Eastwood in excellent form, joins those ranks with ease, as it takes us through a rousing series of taut and explosive events. While we do have to suffer a lot of obvious blue-screens, the outstanding story - along with its actors - makes such minor drawbacks effortless to overlook. There's a lot of plot twists as well, which results in the film being pleasantly unpredictable. We don't get that too much in modern cinema, without it feeling contrived or artificial in some way. Add to that the enchantingly sexy Ingrid Pitt, and you have more than enough reason to watch this great classic. A well-deserved 4 out of 5 stars!

An impossible but no less important mission.. Hyper cool heroes who perform the most daring stunts without as much as breaking a sweat.. Double, triple or even quadruple twists and turns in the plot (Eventually you'll loose count).. Overall, a brainless popcorn movie that does'nt offer anything reputable or realistic. Still its fun to watch Eastwood shooting the crap out of people.

One of the highlights of the World War II military caper films that were rather popular in the 1960s. It has all it needs: an impossible mission to a unique and interesting location, very bad odds and cool heroes. Here: Richard Burton as sly fox planning ahead and Clint Eastwood as tight-lipped rookie. While the first half concentrates on stealth and deception, the second is action packed, both are very exciting. The story offers more twists than you'd expect from such a film, too. As far as the realism of UK and US soldiers easily sneaking into Nazi facilities go: Tarantino certainly had a look at this before doing "Inglourious basterds".

A blisteringly exciting and thoroughly exhilarating action-packed thriller. A classic men on a mission adventure in the tradition of The Guns of Navarone. It's purely entertaining with enough explosive suspense and slam-bang non-stop action to go around for two and a half hours. A smart, dazzling and well-crafted masterpiece. Richard Burton and Clint Eastwood are terrific.