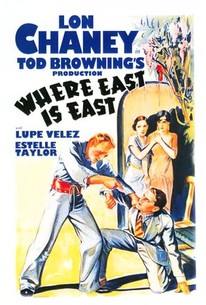 Star Lon Chaney Sr. and director Tod Browning bade adieu to the silent-movie era with 1929's Where East is East. His face covered with hideous scars (convincingly applied with nonflexible collodion), Chaney is cast as weather-beaten animal trapper Tiger Haynes, at present living and working in Indochina. Haynes' loving relationship with his nubile half-caste daughter Toyo (Lupe Velez) is threatened by the return of Toyo's scheming mother, Madame Da Sylva (Estelle Taylor). Still harboring a grudge against Tiger, the Madame decides to get even by stealing Toyo's sweetheart Bobby (Lloyd Hughes) away from her. The villainess also intends to destroy Haynes by turning his animal "pets" against him. But the Madame is herself destroyed by Haynes' loyal gorilla, who in a gruesome (but largely unseen) finale tears the viperish woman apart. A typically morbid entry in the Chaney-Browning series, Where East is East may elicit more laughs than chills when seen today.

Willie Fung
as Servant
View All

Critic Reviews for Where East Is East

Tiger (Lon Chaney) and Toyo (Lupe Velez) have an eyebrow-raising relationship: Lots of kissy face, tickling, lap-sitting and threats of spanking occur when this father and daughter are together.

Audience Reviews for Where East Is East

"Where East is East" is another entertaining and somewhat disturbing film from Director Tod Browning and Lon Chaney, this one set in Asia. Chaney plays a wild animal trainer whose daughter (Lupe Vélez) falls in love with a young man (Lloyd Hughes). After some initial reluctance, Chaney supports their intended marriage, but then trouble comes in the form of Madame de Sylva (Estelle Taylor), an Asian seductress. As she moves in on Hughes, we find out she's actually Chaney's old wife and Vélez's mother, who abandoned them long ago. A disturbing love triangle is thus formed between a young man and a mother and her daughter. Chaney snarls and is and tries to protect his daughter, compelling as always, but it's the women who steal this show. Vélez is a bundle of energy and plays her part with a touching innocence and charm, and Taylor absolutely lights up the screen from the moment she appears - her face and hair are just stunning. The two of them and a macabre (if a bit contrived) ending easily make this a film worth watching. Some notes of interest in the personal lives of the cast: Chaney would sadly die just one year later, and Vélez and Taylor would become such close friends that it would be Taylor at Vélez's side the night she committed suicide 15 years later. Also, some notes on the subject of race, always a lightning rod in watching these old films: It's disappointing that none of the principal Asian roles are played by Asians, Asian countries and cultures are muddled together, and Asian characters are shown butchering basic grammar even when they should be speaking in their native languages to one another. On the other hand, Browning doesn't play to other stereotypes, wisely doesn't attempt to make Taylor or Vélez look "more Asian" with garish make-up, knowing it would be ridiculous (see Renee Adoree in 1927's Mr. Wu, among others), and also includes three lines in correct Chinese, as opposed to putting up a hodgepodge of nonsensical characters. (And interestingly enough, he doesn't even translate those lines into English.) Not bad, especially for 1929.

Not much reason to see this one. Surprisingly, Lon Chaney and director Tod Browning barely distinguish themselves -- the film is more about Estelle Taylor's smoldering glare and a squat guy in a gorilla suit. A hint of horror creeps into the final act, but the crucial scene is so brief that I wonder if "lost" footage could be a factor.

Where East Is East Quotes