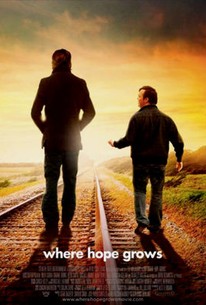 Calvin Campbell is a former professional baseball player sent to an early retirement due to his panic attacks at the plate. Even though he had all the talent for the big leagues, he struggles with the curveballs life has thrown him. Today, he mindlessly sleepwalks through his days and the challenge of raising his teenager daughter. His life is in a slow downward spiral when it is suddenly awakened and invigorated by the most unlikely person - Produce, a young-man with Down syndrome who works at the local grocery store. Calvin slowly loses the chip on his shoulder as he begins to experience the world through Produce's eyes. Faith, work, purpose and most importantly family, blossom into Calvin's life as their friendship develops. The unlikely pair becomes intertwined giving Calvin's life new meaning and purpose, but unfortunately leads to tragedy due to single decision echoed from Calvin's past.

John A. Calhoun
as Mr. Jenkins

Critic Reviews for Where Hope Grows

Director Chris Dowling should have taken another swing at his script for the sake of clarity and dimension before cameras rolled.

Not to be flip, but "Where Hope Grows" has the potential to be a decent inspirational film until God shows up.

Like most if not all faith-based entertainments, "Where Hope Grows" embraces the idea that God works in mysterious ways. But it also insists that God helps only those who help themselves.

Chris Dowling's second feature at first seems anodyne enough, but once the plot mechanics kick into high gear, the film becomes as unsurprising as a prix fixe menu.

"Where Hope Grows" wears its heart on its sleeve, hawking its message of salvation through faith to anyone who's in the market for cheesy uplift and saccharine sentiment.

Writer-director Chris Dowling handles [the] worrisome premise with a more even hand than this genre's ill-advised predecessors ...

This is how you make an emotionally satisfying and intellectually stimulating faith-based film.

DeSanctis is a force of nature, and for the most part this is less of a Bible thumper than a Bible tapper, but it gets downright shameless in the third act.

More admirable for its effort than its execution.

A genuinely heartwarming movie that also has a strong message and solid acting.

A Christian drama about a boy with Down Syndrome who works wonders in the life of a depressed alcoholic.

Audience Reviews for Where Hope Grows

There are no featured audience reviews yet. Click the link below to see what others say about Where Hope Grows!