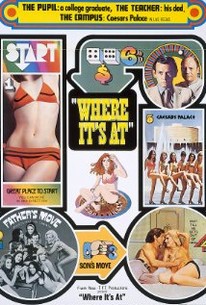 Where It's At Photos

A.C. Smith (David Janssen) is a Las Vegas casino operator whose son visits during his summer vacation from Princeton. His son Andy (Robert Drivas) would rather go to Europe, but daddy dearest wants him to learn the ropes of the gambling business. Pappy approves of and pays for a showgirl to teach his son an extracurricular lesson in erotica. Molly (Brenda Vaccaro) is A.C.'s worldly secretary who watches the office, and Don Rickles has a small role as a crooked blackjack dealer who is caught with his fingers in the pie. Andy catches on quickly and acquires two-thirds of the controlling interest in the casino. He'll have the best story about how he spent his summer vacation when he returns (if he does) to the hallowed halls of Princeton and Ivy League living. ~ Dan Pavlides, Rovi

Debbie Wickstrom
as Thelma
View All

Critic Reviews for Where It's At

Janssen is the best thing in this dreary, disjointed project.

There are no featured reviews for Where It's At at this time.

Where It's At Quotes