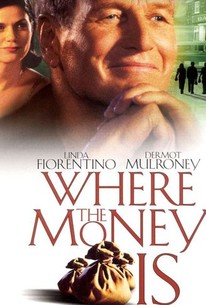 Critics Consensus: The acting in Where the Money Is is excellent. However, the movie feels like a made-for-TV movie that's plain and forgettable.

Critics Consensus: The acting in Where the Money Is is excellent. However, the movie feels like a made-for-TV movie that's plain and forgettable.

Critic Consensus: The acting in Where the Money Is is excellent. However, the movie feels like a made-for-TV movie that's plain and forgettable.

Where the Money Is Photos

An ailing criminal and his excitement-starved nurse decide to knock over a bank for fun and profit in this comic suspense story. Legendary bank robber Henry Manning (Paul Newman) pushes his luck too far and ends up in prison, where he suffers a massive stroke. He is transferred to a nursing home, in the care of Carol Ann McKay (Linda Fiorentino), a high school prom queen who married her boyfriend Wayne (Dermot Mulroney), the star of her school's football team, and whose glamour days are well behind her. After a few of her personal effects mysteriously disappear, Carol Ann starts to suspect that Henry isn't as sick as he seems, and she and Wayne are soon working with Henry to plan his last and greatest score. The title comes from the remark attributed to the outlaw Willie Sutton, who when asked why he robbed banks, replied, "Because that's where the money is."

Rod McLachlan
as Lloyd the Cop

Roderick McLachlan
as Lloyd the Cop

Robert Brewster
as Guy No. 1

Eric Hoziel
as Guy No. 2

Janine Theriault
as Girl No. 1

Philip Preten
as Cop No. 2

Jayne Eastwood
as Connie
View All

Critic Reviews for Where the Money Is

Newman is always at his best portraying slightly disreputable characters such as Hud, Butch Cassidy and Fast Eddie Felson. Where the Money Is proves there's plenty of life in the old (75) boy yet.

Paul Newman idles gracefully through Where the Money Is, a caper film hardly worthy of his presence.

Paul Newman's co-star never really interacts with him -- and their marriage is seriously underwritten, a fatal weakness toward the end.

It's not a great film, and Road to Perdition will probably be remembered as Newman's best work from this period, but it just goes to show you how essential actors like him really were.

Perhaps its final part is solved too easily, but there's a huge attractive in the fact that both characters get their way and continue their criminal work. [Full review in Spanish]

Paul Newman's charismatic performance elevates this hodgepodge of a picture, but it is not enough.

The money of the film's title should refer to Paul Newman, because the actor's presence elevates this routine caper into a pleasantly bankable diversion.

A sly, smooth, extremely enjoyable caper... full of scenes you want to get lost in.

Audience Reviews for Where the Money Is

There are no featured audience reviews yet. Click the link below to see what others say about Where the Money Is!

Where the Money Is Quotes