Where the Sidewalk Ends1950 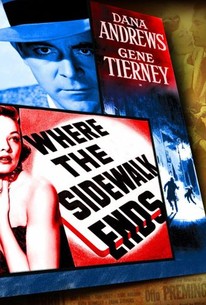 Where the Sidewalk Ends Photos

Dana Andrews is brutal metropolitan police detective Dixon, who despises all criminals because his father had been one. When the cops pick up two-bit gambler Ken Paine (Craig Stevens) as a murder suspect, Dixon subjects Paine to the third degree -- and accidentally kills him. In disposing of the body, Dixon inadvertently places the blame for the killing on cab driver Jiggs Taylor (Tom Tully). Having fallen in love with Jigg's daughter, Morgan (Gene Tierney), Dixon tries to clear the cabbie without implicating himself, but ultimately he becomes trapped in a web of his own making; luckily Morgan promises to stand by him. Where the Sidewalk Ends was adapted from a novel by William L. Stuart; its director was Otto Preminger, who'd previously put Andrews and Tierney through their paces in Laura (1944).

Robert B. Williams
as Detective

Fred Graham
as Attendant
View All

Critic Reviews for Where the Sidewalk Ends

Otto Preminger, director, does an excellent job of pacing the story and of building sympathy for Andrews.

Fox may not have plumbed the depths of realism this time, but it still looks interesting, even two-thirds of the way down.

A weatherbeaten Andrews gives one of his finest performances.

An efficient, bleak noir with an Oedipal twist.

The last of Otto Preminger's studio pictures at Fox, this 1950 feature has many of the noirish qualities of his Laura and Fallen Angel: Dana Andrews, ambiguity about the characters' dark undertones, and a fluid, fascinating mise en scene.

Preminger's slick noir gem presents a damning indictment of the criminal justice system's perpetual rot and the kinds of cops who take the law into their own hands.

A formidable and gritty performance from a gruff Dana Andrews highlights the pensive and anxious Where the Sidewalk Ends.

The whole thing builds to a logical'conclusion. with suspense along the way.

Full of mystery and darkness, the film costumes every player with low-brimmed fedoras and long, flowing trench coats.

Where the Sidewalk Ends offers what most audiences expect from a classic noir - cops, corruption, moody lighting, and a jazz-inflected soundtrack.

A beautiful system of obsessions and ambiguities

Strongly paced and gorgeously shot, the film showcases Hecht's writing at its best and is a perfect fit for Preminger.

Audience Reviews for Where the Sidewalk Ends

I know that there is no such thing as the 'perfect film', but I it's hard to imagine how they could have made this one any better. The only thing that comes to mind is fixing Gene Tierney's annoying overbite. Maybe.

A good ole Black and White Police Drama, this one is about a Detective who is been warned about roughing up his suspects, while questioning one the fight and he kills him, so he tries his best to cover it up, which only leads to others being wrongfully blamed. The story then unfolds as he tries to make all the wrongs fall into place. A movie ahead f its time. 4 stars.

A brilliant story, part of the film noir left over from the 40s, and starring two famous noir actors: Tierney and Andrews. I loved this movie.

Dead solid Preminger / Andrews outing. Seedy side of New York is the setting for this bad-cop noir. Preminger quietly does some very cool things moving the camera and blocking his actors.

Where the Sidewalk Ends Quotes