Where the Wild Things Are2009 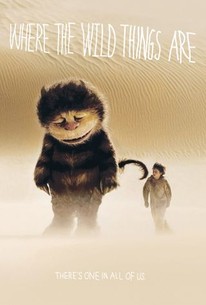 Critics Consensus: Some may find its dark tone and slender narrative off-putting, but Spike Jonze's heartfelt adaptation of the classic children's book is as beautiful as it is uncompromising.

Critics Consensus: Some may find its dark tone and slender narrative off-putting, but Spike Jonze's heartfelt adaptation of the classic children's book is as beautiful as it is uncompromising.

Critic Consensus: Some may find its dark tone and slender narrative off-putting, but Spike Jonze's heartfelt adaptation of the classic children's book is as beautiful as it is uncompromising.

Where the Wild Things Are Photos

Visionary director Spike Jonze brings Maurice Sendak's beloved children's book to the big screen with the help of hipster icon Dave Eggers, who teamed with Jonze to pen the adapted screenplay. A mixture of real actors, computer animation, and live puppeteering, Where the Wild Things Are follows the adventures of a young boy named Max (Max Records) as he enters the world of the Wild Things, a race of strange and enormous creatures who gradually turn the young boy into their king. ~ Jason Buchanan, Rovi

Mark Ruffalo
as The Boyfriend

Angus Sampson
as The Bull

Mark McCracken
as The Bull

Michael Berry Jr.
as The Bull

Lauren Ambrose
as KW
View All

News & Interviews for Where the Wild Things Are

View All Where the Wild Things Are News

Critic Reviews for Where the Wild Things Are

It's a quiet reminder of the power of scary-ish stories, and it's made with warmth, humor, and wisdom.

It is bewildering but not in an emotionally complex or troublesome way. It's bewildering in a narratively confused, narratively lost, we-never-figured-out-what-we-wanted-all-this-extra-stuff-to-add-up-to sort of way.

The minus I give this children's story pains me...If I had seen this film when I was eight, I would have been terrified.

A film for anyone who's ever climbed trees, grazed knees or basked in the comfort of a parent's sympathy as they've pulled you off the ground crying. It'll make your inner child run wild.

'Where the Wild Things Are' stands out for its unusually potent evocation of the timbre of childhood imagining, with its combination of the outré and the banal, grand schemes jumbled up with delicate feelings and the urge to smash things up.

Where the Wild Things Are isn't designed to distract children, but rather to celebrate them.

A moving, thoughtful look back at a time in our lives when we didn't understand the way the world works.

A mood piece, a wholly transporting and wonderful film that exists in that special realm where the young and the young at heart meet.

Here's a film that manages to stay true to its roots, while expanding it into new depths that will surely please all the book's fans.

It's a brilliant film in how it gives our character an opportunity to confront himself and his mother and realize they are both imperfect but trying.

Audience Reviews for Where the Wild Things Are

Spike Jonze's auteurish adaptation of Maurice Sendak's classic children's book is dark, visually haunting and more adult in tone than the original story, taking us on a melancholy journey into a kid's inner self where his wild things are.

Often moody and somber, Spike Jonze's 'Where the Wild Things Are' is strangely an emotionally hefty film. The pathos created is unexpected, but captures the tone of the film well. I've never seen a film so vividly encompass the emotional roller coaster we call childhood. A great soundtrack and amazing imagery definitely work in the movie's favor. A solid film, but it ends on a note that really isn't too upbeat, which is surprising for a film about a children's book. Jonze has definitely captured the soul of childhood, but the real question is whether or not he can capture his audience.

Where the Wild Things Are Quotes