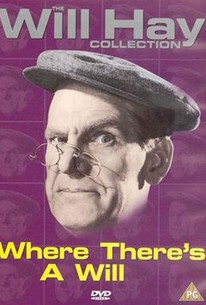 Will Hay plays Benjamin Stubbins, an unsuccessful and incompetent English lawyer with a tendency to tip the bottle and an inability to pay any of the considerable debts he has managed to accumulate. His wealthy family, of course, disapproves of him and has taken custody of his daughter so that she will receive a proper upbringing. Stubbins does not improve matters by visiting his brother-in-law and accidentally getting the butler drunk when he recommends alcohol as the cure for his toothache. He gets no more respect at the office, where lazy office boy Willie ignores his instructions in favor of reading the comics. Stubbins' life changes, however, when a gang of American crooks shows up. They know that the safe to a bank is located directly underneath his office and they employ the unsuspecting solicitor to track down a family tree, thus keeping him out of the office while they stage a robbery. Later, they show up at Stubbins' brother-in-law's house during a Christmas party, planning to fleece the host and his guests. Fortunately, Stubbins also shows up, disguised as Santa, and after the usual chase, the gang is captured.

Frederick Piper
as a Fingerprint

Sybil Brooke
as the Landlady

Will Hay
as Benjamin Stubbins
View All

Critic Reviews for Where There's a Will

There are no critic reviews yet for Where There's a Will. Keep checking Rotten Tomatoes for updates!

Audience Reviews for Where There's a Will

There are no featured audience reviews yet. Click the link below to see what others say about Where There's a Will!

Where There's a Will Quotes