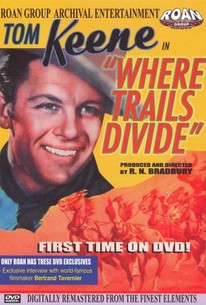 Where Trails Divide was the second entry in Tom Keene's western series for Monogram. Not as good as the first (God's Country and the Man), it still contained much to admire, especially for a run-of-the-mill "B" western. Keene plays a frontier lawyer who hangs up his shingle in a lawless town. When the opportunity presents itself, our hero reveals that he's really a federal agent, assigned to clean up the local criminal element, led by stagecoach robber Warner Richmond (who delivers the film's best performance). With a minimum of gunplay, Keene accomplishes his goal, winning the undying affection of heroine Eleanor Stewart.

Critic Reviews for Where Trails Divide

There are no critic reviews yet for Where Trails Divide. Keep checking Rotten Tomatoes for updates!

There are no featured reviews for Where Trails Divide at this time.