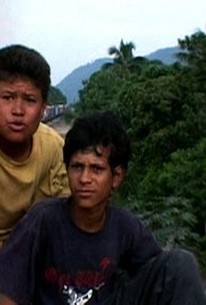 As the United States continues to build a wall between itself and Mexico, Which Way Home shows the personal side of immigration through the eyes of children who face harrowing dangers with enormous courage and resourcefulness as they endeavor to make it to the United States.The film follows several unaccompanied child migrants as they journey through Mexico en route to the U.S. on a freight train they call " The Beast ". Director Rebecca Cammisa (Sister Helen) tracks the stories of children like Olga and Freddy, nine-year old Hondurans who are desperately trying to reach their families in Minnesota, and Jose, a ten-year-old El Salvadoran who has been abandoned by smugglers and ends up alone in a Mexican detention center, and focuses on Kevin, a canny, streetwise 14-year-old Honduran, whose mother hopes that he will reach New York City and send money back to his family. These are stories of hope and courage, disappointment and sorrow. They are the ones you never hear about - the invisible ones. --© Official Site

Critic Reviews for Which Way Home

Without resorting to any background narration, Which Way Home raises questions about cross-border immigration policies and the macro-economic causes that propel people from struggling countries to stream into developed ones.

Despite the subject matter -- terrified children, many who haven't seen their families in years -- Cammisa never gets sentimental, and instead lets those closest to the subject do the talking.

Dramatically and pictorially pulls its weight.

Foregrounds the idealistic vulnerability of the boys at its center, risking everything for a better life they can barely imagine.

This is uncomfortable subject matter... But it's also tremendous, eye-opening filmmaking -- and that's always worth watching.

Investigates illegal immigration and child labor in a very human way. We ride freight trains with teenagers trying to get to the US for a better life. Exceptionally effective verite filmmaking from Rebecca Cammisa.

Even without illustration or allusive images, the children's own descriptions are harrowing.

A riveting documentary that taps into the same concept and themes of Sin Nombre, except it's all real and it's all heartbreaking to watch.

Audience Reviews for Which Way Home

There are no featured audience reviews yet. Click the link below to see what others say about Which Way Home!