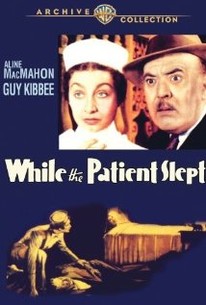 Based on a mystery novel by Mignon Eberhardt, While the Patient Slept stars Aline MacMahon as Eberhardt's middle-aged amateur sleuth, Nurse Sarah Keate. Our heroine is summoned to the home of millionaire Adolphe Federie (Robert H. Barrat), who has suffered a stroke. Federie sleeps through an incredible series of intrigues involving family secrets, stolen heirlooms, and other such niceties. When a murder occurs, it's up to the efficient Nurse Keate to solve the mystery. Still, nursie finds time to pursue a cute romance with cherubic Lance O'Leary (Guy Kibbee). While the Patient Slept was part of Warner's brief "Clue Club" series, which also included the studio's Perry Mason mysteries (Incidentally, Hollywood's subsequent "Sarah Keate" films tended not only to alter the name of the nurse protagonist, but also her age: In one picture, she was played by "oomph girl" Ann Sheridan!) ~ Hal Erickson, Rovi

Critic Reviews for While The Patient Slept

There are no critic reviews yet for While The Patient Slept. Keep checking Rotten Tomatoes for updates!

There are no featured reviews for While The Patient Slept at this time.

While The Patient Slept Quotes