While You Were Sleeping1995 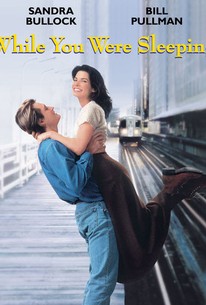 Critics Consensus: While You Were Sleeping is built wholly from familiar ingredients, but assembled with such skill -- and with such a charming performance from Sandra Bullock -- that it gives formula a good name.

Critics Consensus: While You Were Sleeping is built wholly from familiar ingredients, but assembled with such skill -- and with such a charming performance from Sandra Bullock -- that it gives formula a good name.

Critic Consensus: While You Were Sleeping is built wholly from familiar ingredients, but assembled with such skill -- and with such a charming performance from Sandra Bullock -- that it gives formula a good name.

While You Were Sleeping Videos

While You Were Sleeping Photos

This offbeat romantic comedy has some rather dark underpinnings that add, rather than detract from the fun. It is the story of Lucy, an extremely lonely young woman who works as a toll-taker for the Chicago Transit Authority. She is secretly in love with a handsome stranger in a camel-hair coat who passes by her every day but never even says hello to her. Just before Christmas, she is at work when she sees her "love" pushed, mugged and shoved off the train platform. Without hesitation she leaps down to pull the unconscious fellow out of the path of a speeding train. Later in the hospital, a series of complex misunderstandings occur and the woman is mistaken for the man's fiancee. As he is deeply comatose, Lucy goes along with it, much to the delight of the man's loud, dysfunctional family. Lucy has no real family, and she is happy to be a part of his strange brood. To make sure she stays, she decides to take certain liberties with her sleeping husband-to-be. Meanwhile, she and the patient's brother find themselves drawn to each other.

Gene Janson
as Man in Chuch

Kevin Gudahl
as Cop at ICU

Critic Reviews for While You Were Sleeping

[Bullock] knows one of the secrets of doing romantic comedy: treating the romance as a good joke.

Compared to While You Were Sleeping, even the half-baked scenario of the Marisa Tomei-Robert Downey Jr. romance Only You looks witty and inventive.

It's Bullock's first shot at a role in which she plays second fiddle neither to males nor special effects. And she turns out to be every bit as delightful as anyone might have expected.

A cute premise with engaging leads but little else to keep you awake.

It plays like a movie dreamed up by people in a studio marketing department who'd decided to bare their souls.

Like most American romantic comedies, this is all heart and no head, but it does have a habit of sneaking in some intriguing twists and turns when you least expect it.

I don't buy it, and it's the kind of plot that genuinely leaves me cold.

The script is actually really solid and the performances are so likable.

It's practically certain to lull moviegoers into a pleasant state of dreamy bliss.

Audience Reviews for While You Were Sleeping

It's cheesy, ridiculous and formulaic. Everything you want in a rom-com.

An ok early Rom-Com starring Sandra Bullock. It's cheesy and predictable but it has a certain likability about it nevertheless.

A quirky film! Different from a lot of the typical romantic dramas. Very good! Sandra Bullock is excellent!

The key to this movie was Bill Pullman and Sanda Bullock clicking on such a natural level. They made the movie feel right. I love this movie. Im a sappy guy so this is a winner for me. One of my favorite romantic comedies.

While You Were Sleeping Quotes