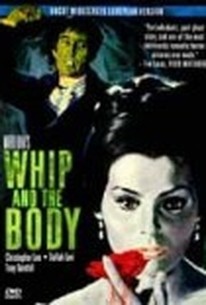 Marred by controversy at the time of its release, this horror fantasy from Italy's legendary horror director Mario Bava centers on the twisted desires of a nobleman's son (Christopher Lee). Lee is ostracized by his father for his dalliances with a servant girl (who later commits suicide), but is allowed to return to the fold by his brother, whose lovely wife (Dahlia Lavi) immediately becomes the object of Lee's mad lust. Lee is later found murdered, along with several other victims from the surrounding village, leading superstitious locals to believe that Lee's evil spirit has returned to destroy them; the twist ending reveals the real evil at work. The kinky, sadomasochistic relationship between Lee and Lavi raised more than a few censors' eyebrows, leading to some harsh cuts.

Jacques Herlin
as Priest
View All

The Whip and the Body is a gothic horror fantasy that finds Bava at the peak of his visual prowess.

A fascinating comment on the illusive and fetishistic nature of reality.

Many Mario Bava fans consider this to be one of his best, and it's certainly a contender with its effectively stylish rendering of a pulpy ghost mystery.

Someone sent me this on tape. I may speak to them again one day.

Wow, this was a really cool movie. Lee is fantastically terrifying and sexy at the same time. The story is a spooky romance filled with murder and mystery. Also the costumes, set, and colours are beautiful. I really enjoyed this movie, it's exciting and I loved the end. If the rest of the cast had been more well known, this would be a more popular movie, though. But overall, I really liked it.

As I slowly get to watch more Mario Bava movies my enthusiasm for his extraordinary body of work grows and grows. I was already hooked after watching 'Black Sunday' for the first time, but after subsequently seeing 'Kill, Baby...Kill!', 'Planet Of The Vampires', 'Black Sabbath', 'Diabolik' and 'Lisa And The Devil' (and others) I was convinced that he's THE most underrated director of the Fantastic. Now I've watched 'The Whip And The Body' three times and listened to Tim Lucas' informative DVD commentary I'm almost ready to bow down and worship Bava like a god! This is such a fascinating movie... Visually it's stunning, as to be expected, Bava being a top cinematographer before turning to directing. The subject matter is still provocative, but forty years ago it must have been scandalous! In fact the movie was heavily censored and when eventually released in America given the lousy title 'What'. Christopher Lee counts this among his favourite roles and it is essential viewing for his fans. He plays Kurt Menliff, an evil sadistic nobleman returning to his family home after hearing his younger brother has wed. Lee's family has disowned him after a scandal concerning a servant girl he seduced who subsequently suicided. His father the Count despises him, the dead girl's mother, who still works for the Count, curses him, and his brother's new bride Nevenka (Daliah Lavi) fears him. Kurt and Nevenka have a past, not only that, a complicated sadomasochistic relationship. The whipping scenes between the two actors were a bit too much for the censors to handle back in the day, and while they aren't all that explicit, they are still unsettling even today. Lee and the stunning Lavi (best know to most people for her later appearance in the star-studded Bond spoof 'Casino Royale') make a truly unforgettable couple. Many people regard 'The Whip And The Body' as Bava's single best movie. I wouldn't go that far myself, but it's definitely one of his very best films, and is sure to impress anyone who has enjoyed his other pictures. Ghost story, murder mystery, psychosexual character study, whatever you want to call it, it's a highly original movie that will stay with you for a long time. Newcomers to Bava are still best to start with 'Black Sunday' in my opinion, but this movie comes with my highest recommendation.

Gorgeous, so gorgeous. The score, the colours, the setting, the clothing. The haunting scenes were exquisitely beautiful. Oh, if only the woman hadn't been so annoying.

I don't really know what happened, but boy was it beautifully photographed and boy were the ladies smoking hot