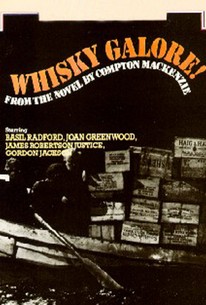 Critics Consensus: A raucous caper with a dash of rebellious subtext, Whisky Galore! is a smooth comedic gem that audiences can enjoy on the rocks.

Critics Consensus: A raucous caper with a dash of rebellious subtext, Whisky Galore! is a smooth comedic gem that audiences can enjoy on the rocks.

Critic Consensus: A raucous caper with a dash of rebellious subtext, Whisky Galore! is a smooth comedic gem that audiences can enjoy on the rocks.

Originally released in Great Britain as Whisky Galore!, Tight Little Island is a comedy predicated on the notion that all Scotsmen are lushes. The tiny Scots Island of Todday suffers from a wartime whisky shortage. Luck of luck, a ship full of the precious liquid is wrecked on a reef. The islanders conspire to smuggle the whisky off the ship right under the noses of the pesky British revenue officials. Numerous clever comic complications occur before the happy ending--which, we are told by the narrator, was not so happy once all the whisky was consumed. Tight Little Island is regarded by devotees of British comedy as the best and most representative offering from the short-lived Ealing Studios.

Morland Graham
as The Biffer

One of three Ealing comedies released in 1949 (the others were Passport to Pimlico and Kind Hearts and Coronets), and remains by far the sharpest, freshest and most resonant.

Basil Radford, Joan Greenwood, Catherine Lacey and Gordon Jackson are among the players who got fed up with drinking cold tea and pretending it was the hard stuff.

A classic tale of gentle anti-authoritarianism.

Beguiling, subversive and a complete joy.

Out of this excellent idea, which less skilled hands might have reduced to farce, the British moviemakers have spun a tight little comedy of pure gold.

Slight in nature, soft in humor, "Whisky Galore" is full of fine performances of actors who went on to greater fame.

This criminal comedy, directed by Alexander Mackendrick and produced by Ealing Studios, seems to me somewhat silly and insipid, but I immediately recognize an interesting subject which I identify with. [Full review in Spanish]

With a comedy this old, the laughs are comfort food, the giggles coming from the cheek-pinching adorability of the character "types."

In a sense, Whisky Galore! is one of the earliest examples of the British "village movie," those charming little films where citizens of a small, picturesque hamlet band together to do something endearingly scandalous.

There's plenty of slapstick in Whisky Galore, but even more appealing is the exquisite current of social satire coursing through the film's narrative.

It's not vintage Ealing, but it's a fine dram all the same.

Delightful post-war British comedy illustrating for the umpteenth time the fighting spirit of the "ordinary Joe" (or in this case Jock) when set against the pomposity of the would-be ruling classes. Capt Waggett (Basil Radford) is the real star here as the middle class representative of stiff upper lippery. Surely Jimmy Perry and David Croft must have drawn on him when they were dreaming up the Capt Mainwaring character for the long-running BBC TV sit-com "Dad's Army". Even one of Waggett's lines ("I was waiting to see when you'd spot that", a comment usually made when Mainwaring had just uttered some piece of logistical nonsense) made an appearance. Unmissable example of British comedy rooted in the style that made Ealing so succesful

[Warning: Some might say this review contains spoilers, though I personally wouldn't have minded reading any of these comments beforehand.] I love many of those little British comedies of the '50s and early '60s, and I know this is regarded as a classic and one of the first of its breed. But this film really frustrated me. The premise of an isolated, unhappily "dry" island suddenly finding itself with a motherlode of contraband alcohol is so wonderful, but the execution just doesn't pay off like it should. I envisioned a plot about the amusing repercussions of sitting on this bounty. Some people will get too drunk. Other people will do unwise things while drunk. Other people will covet others' stashes, resulting in a comic series of thefts and quarrels. Great fun. But instead, a large chunk of the film is devoted to simply *getting* the whisky and setting the story in motion. And once the town has its booze, not much happens beyond the authorities trying to claim it back. Very little in the way of human comedy results -- just car chases and action scenes. Furthermore, the final *minute* or so suddenly adds a buzzkill conclusion which comes off like something hastily inserted after the temperance board protested an early screening. What a drag!