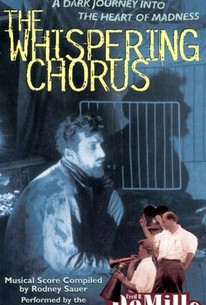 The Whispering Chorus was arguably the closest Cecil B. DeMille ever came to making an "art" picture. Stalwart DeMille supporting player Raymond Hatton gave the performance of his career as embezzling bank clerk John Trimble. Hoping to escape punishment for his crimes, Trimble arranges for an anonymous, mutilated corpse to be identified as his own then starts life over again with a new identity. Several years later, however, Trimble is caught in a web of circumstantial evidence, and ends up being put on trial for his own murder! Prepared to reveal his true identity, Trimble is begged not to do so by his dying mother (Edythe Chapman), since such a revelation would bring disgrace upon Trimble's "widow" Jane (Kathryn Williams), who has since become the wife of Governor George Cogswell (Elliot Dexter) and is currently pregnant with her second husband's baby. Not wishing to see his wife branded a bigamist and her unborn child labelled a bastard, Trimble maintains his silence and willingly goes to the gallows. Some of the special-effects work in The Whispering Chorus bordered on the miraculous, especially the sequence in which Trimble is "surrounded" by the voices of his Thoughts, but what lingers longest in the memory are the performances by Raymond Hatton and Edythe Chapman. Unfortunately, The Whispering Chorus was a resounding failure at the box office, convincing director DeMille to ever afterward forsake "Art" in favor of gaudy showmanship.

Critic Reviews for The Whispering Chorus

There are no featured reviews for The Whispering Chorus at this time.