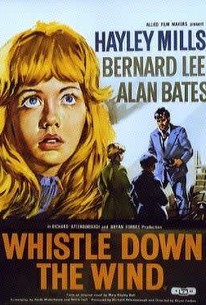 Whistle Down the Wind Photos

Bryan Forbes' first directorial effort is set in a rugged Lancashire farm community. Three impressionable children, played by Hayley Mills, Diane Holgate, and Alan Barnes, come across a bearded vagrant named Arthur Blakey (Alan Bates) sleeping in their barn. Upon awakening, the ill-tempered bum takes a look at the white-eyed kids and mutters the imprecation "Jesus Christ!" In their innocence, the children assume that Arthur is Jesus Christ, and they spread the word to their friends. In truth, he is an escaped killer. But when the authorities come around looking for him, the kids, remembering Christ's persecution, do their best to protect their far-from-deserving new friend. Though the material, based on a novel by Mary Hayley Bell (Hayley Mills's mother) could have been mawkish and obvious in other hands, Forbes handles the situation and the characters realistically; even the blatant New Testament symbolism is logically incorporated into the proceedings. ~ Hal Erickson, Rovi

Robert Palmer
as Disciple
View All

Critic Reviews for Whistle Down the Wind

There's a memorable tension between the suggestibility of the children and the forbidding countryside...

Thanks mostly to Hayley and other delightful youngsters, there are some touching moments in this strange and whimsical yarn.

Bryan Forbes, directing for the first time, reveals a painstaking, often incisive talent for behaviour rather than a marked personal style.

My only amazement is that the melodrama didn't turn mawkish.

Though admittedly simple, Whistle Down the Wind leaves much to ponder.

We are spared any coy allegorical commentary

Audience Reviews for Whistle Down the Wind

great performances from the kids. even hayley mills isn't too annoying. the metaphor is a little heavy handed tho. possible inspiration for 'spirit of the beehive'??

I'm not sure I'm all that comfortable about the religious aspects, but they do it in such a way... I love Alan Bates as 'Jesus', Hayley Mills and the fact her mum wrote it. The children are great, the story is genius and the film... incomparable.

Whistle Down the Wind Quotes