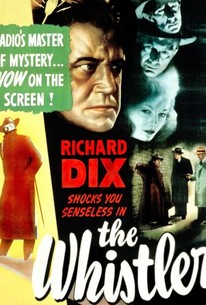 The Whistler was the first of eight Columbia "B" thrillers based on the popular radio series of the same name. The Whistler, a shadowy (and unbilled) figure, introduced each film as he'd done on radio: "I am the Whistler...and I know many things, for I walk by night." This time the Whistler tells the strange story of despondent Richard Dix, who, believing his wife dead, hires professional killer J. Carroll Naish to put him out of his misery. Then the wife suddenly shows up...and Dix can't locate his would-be assassin. An old story with plenty of fresh new twists (for example, Naish talks of his profession as though it were a fine art like painting and sculpture), The Whistler bode well for the seven films that followed. Richard Dix starred in all but one film in the series, alternating between hero and heavy.

J. Carroll Naish
as The Killer

Trevor Bardette
as The Thief

Otto Forrest
as The Whistler
View All

Critic Reviews for The Whistler

Unfortunately, it has been handled by a script writer and director with barely an original thought between them, so that it is developed in a drab, routine manner.

We get the routine spectacle of a dragged-out killer-and-victim chase, all very serious and phony-and, consequently, very dull.

There are too many irrelevant incidents, and far too many pointless scenes.

The film's theme is that man cannot change his destiny, and if his destiny is to die by murder...that's what it will be.

Audience Reviews for The Whistler

The first entry in this Film Noir series is one of the best. Fans of Noir will want to check these films out.