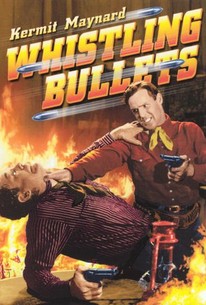 Whistling Bullets was one of better Kermit Maynard westerns from the Ambassador Pictures "B"-mill. Based on a story by James Oliver Curwood, the story finds Texas Ranger Larry Graham (Maynard) hot on the trail of an outlaw and his gang. To gain the villains' confidence, Larry poses as an escaped criminal, deliberately gets sent to prison, and befriends the outlaw, hoping that the fellow will lead him to a cache of stolen money. John English, later a mainstay of the Republic "B"-western product., directs, while Harlene Wood co-stars as the heroine.

Cherokee Alcorn
as Karl
View All

There are no critic reviews yet for Whistling Bullets. Keep checking Rotten Tomatoes for updates!

There are no featured reviews for Whistling Bullets at this time.