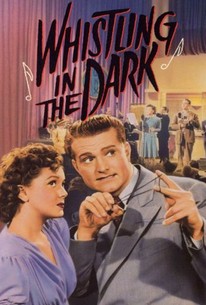 Whistling in the Dark Photos

Though based on a stage play by Laurence Gross and Edward Childs Carpenter (previously filmed as an Ernest Truex vehicle in 1933), MGM's Whistling in the Dark was clearly inspired by the success of Paramount's Bob Hope comedy-mystery The Ghost Breakers. In his first film starring role, Red Skelton plays radio actor Wally Benton, better known to his fans as that intrepid crime-solver "The Fox". On the eve of his wedding to perennial fiancee Carol Lambert (Ann Rutherford), Wally is summoned to the mansion of cult leader Joseph Jones (Conrad Veidt). Though he preaches a message of "radiant contentment" to his followers, Jones is actually a racketeer who hopes to get his hands on a $1,000,000 inheritance. The only person standing in the way of Jones' windfall is the sole heir, mild-mannered Mr. Upshaw (Lloyd Corrigan), who is about to take a business trip by plane. Impressed by "The Fox"'s encyclopedic knowledge of crime, Jones wants Wally to plan a "perfect murder", one which will put Upshaw out of the way without detection. Naturally, Wally balks at this, but he is persuaded to go along with Jones when the latter kidnaps both Carol and Fran Post (Virginia Grey), the daughter of Wally's sponsor (Henry O'Neill). Considerately, Jones gives Wally till 11 o'clock to come up with his plan, leaving our hapless hero in the "care" of hulking henchman Sylvester (Rags Ragland). Fully aware that neither his life nor those of Carol and Fran will be worth five cents once Upshaw is murdered, Wally spends most of the evening trying to concoct a way out of his jam. Full of hilarious one-liners and sidesplitting slapstick, Whistling in the Dark is also quite suspenseful--especially in the final reel, wherein the best line is delivered by the pop-eyed potential murder victim. So well received was Whistling in the Dark that MGM rushed out two sequels, also starring Red Skelton, Ann Rutherford and a "reformed" Rags Ragland.

Will Lee
as Herman

Critic Reviews for Whistling in the Dark

There are no critic reviews yet for Whistling in the Dark. Keep checking Rotten Tomatoes for updates!

Audience Reviews for Whistling in the Dark

Snappy comic thriller with Skelton funny as radio performer The Fox ably assisted by Ann Rutherford and Virginia Grey both full of sass.

Whistling in the Dark Quotes