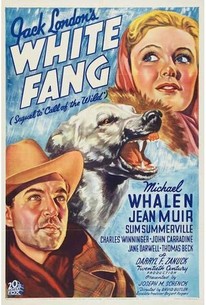 Based on Jack London's famous story of the same name, White Fang was first filmed in 1925. It is set in the Gold Rush era in Alaska and the Yukon. Sylvia Burgess (Jean Muir) is traveling with her brother Hal (Thomas Beck) to a gold mine that they have inherited from their father. Their guide is Weedon Scott (Michael Whalen), who owns the tracking dog, White Fang. Along the arduous journey, Hal dies. Beauty Smith (John Carradine), the leader of a criminal gang, claims that Scott murdered Hal. His men try to take possession of the mine, but they are thwarted by White Fang. Eventually, Hal's diary reveals that he killed himself in despair, and Smith's plans are foiled. ~ Michael Betzold, Rovi

Marie Chorie
as Nomi
View All

There are no critic reviews yet for White Fang. Keep checking Rotten Tomatoes for updates!

There are no featured reviews for White Fang at this time.