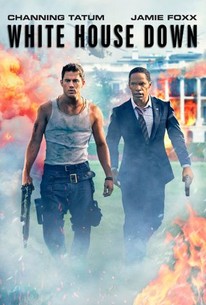 Nicolas Wright
as Donnie the Guide

Brent Skagford
as Marine One Pilot

News & Interviews for White House Down

View All White House Down News

Critic Reviews for White House Down

There is a certain comfort you can derive from these predictable mega-budget monsters. Trouble is, it goes on too long. It has several climactic moments, but every time you ready for the exit, the film bounces back again for the next round.

At least has the good grace to laugh at itself as it rolls out the dingbat-daft action-movie cliches.

It is appallingly funny in a way that few parodies ever manage. But it is undeniably exciting.

Roland Emmerich (Independence Day, The Day After Tomorrow) can do these films in his sleep; which may be why they sometimes emerge as nightmares of crazed, florid hokum.

Real thrills - dependent on real, believable jeopardy - are not on offer: just cheerfully absurd spectacle and a little bit of humour.

t's a '90s throwback from the king of '90s disaster schlock himself, Roland Emmerich - and at the same time, weirdly prescient.

Restraint has never been one of director Emmerich's strengths, and here such indiscretion is both abundantly clear and a bane to the believability of an outlandish premise.

This is the third time that Emmerich has managed to assault the White House, which makes one wonder whether or not Emmerich has unresolved political feelings.

The nicest thing that can be said about director Roland Emmerich's White House Down is that it is the second best Die Hard rip-off set in the Presidential estate released in the last four months.

Even critics succumb to the odd guilty pleasure, and for me this movie, which doesn't bear thinking about, crosses over into the so-bad-it's-good department.

Audience Reviews for White House Down

A classic Die Hard premise, very professionally executed by the master of destruction. When the film doesn't take itself too seriously while kicking ass, it works like a charm. Unfortunately, some scenes are so silly they're almost unintentionally funny (POTUS + bazooka on White House lawn car chase) and the flag waving finale is way too much. But other than that this is pretty solid and entertaining action cinema.

Over two hours!? really?? for this??!! well don't say I didn't warn you. So lets dispense with the formulaic statements that we all know are bound to crop up here, I will say this only once (maybe). Its 'Die Hard in a building', or more specifically 'Die Hard in the White House'. We all know this so lets get it out there now, difference is this time we have a duel on our hands. Again I think we all know this but here we go, 'White House Down' vs 'Olympus Has Fallen' FIGHT!!. So yeah the plot, errrmm...its exactly the same as 'OHF', bar a few obvious directions its exactly the same damn film. Terrorists siege the Presidents big white house and take it over, this equals massive amounts of death and destruction the likes of which John McClane hasn't seen since 'Die Hard 3'. Its hard to believe this film almost follows the exact same path as 'OHF', almost scene for scene I kid you not. Despite different events and character routes these films are the most identical films I think I've ever seen! the gunship sequences are so suspiciously similar its not even funny. This film starts off idiotically, Tatum is trying to get a job with the secret service based at the White House, apparently you can bring your kids to these highly classified job interviews. All this simply because he's having daughter issues and wants to impress her, riiight. He fails to get the job so off they go on a tour of the White House where they bump into the President, riiight, do I go on with this? The film continues to be idiotic as a group of terrorists casually waltz in and begin to take over the most protected and highly watched building in the world. Again we are shown how terrible the secret service undercover guards and military personnel are at their jobs by being killed instantly and very easily. Everyone is killed and its up to Tatum to save the day, the hook in this film is his sidekick for the most part is the President. Unfortunately they have decided to make the President of the USA more like a buffoon and the comedic half of the action duo. Now of course in reality I'm sure the President would be useless in such a situation but was all the stupid Chris Tucker-like humour required?? I'm surprised Tatum doesn't slap him across the face like a bitch at times. Although yes I admit a butch President running around gunning the bad guys down would be equally daft so maybe that was the right choice, but just less goofy perhaps. This is where this film has gone horribly horribly wrong, an attempted action film which can't decide how serious its wants to be. There is a lot of death, action, explosions, carnage etc...but there is also cringing hammy dialog and moments of humour that make you think you're watching a PG-13, oh wait...it is a PG-13. This wouldn't be a problem if it wasn't for the semi serious action and death on view. 'Lethal Weapon' has both elements but its still an adult film which works well, this is just awkward and goofy, very goofy. Of course I realise its not meant to be a serious film, you take it at face value as with any other action flick. The problem is it pails in comparison to the earlier version 'OHF'. The Butler vehicle is the perfect example of how to make a thrilling action film about terrorists for adults (as it should be) and no silly comedy. This film is the perfect example of how not to make an action film about terrorists by aiming it at a wider audience with the PG-13 rating, this equals mediocre gutless shenanigans. I mean lets take a sequence for a moment. The action sequence where Tatum and Kato are speeding around in the Presidential limo on the White House grounds. What on earth is that about?? they are literately driving around and around in circles with these heavily armed jeeps firing a minigun up their ass. Hundreds of civvies, press, police etc...are all standing about by the gates and watching this go down as if it were a show! watching these vehicles merely go round and round with bullets flying everywhere! I mean hell, this film doesn't even look that good compared to the other version, granted the CGI isn't great in either films but nothing seems to be explored here. It feels confined and limited (despite the budget), the siege isn't really that marvellous, fights/gun fights seem average, the bad guys don't really feel bad enough, on the whole it all feels underwhelming and not much of a spectacle at all. I felt James Woods was held back from being a really nasty piece of work, we all know Woods, we all know his fast cutting verbal, come on!. There was a great chance for a villain there, alas they didn't take it. Had 'OHF' never existed then this film would obviously fair much better, it still wouldn't be great because of the crapness but it could be seen as more fun. Unfortunately the other film shows this film up extremely badly by giving Emmerich a visual lesson in how action films should be made, how it should be done. On a final note just how old is Gyllenhaal exactly?? she looks about forty years old Jesus! what the fudge!! End of the day it does what it says on the tin in a slightly lighthearted watered down fashion, but 'Olympus Has Fallen' simply does it way way better, period.

It's nice Hollywood still makes films for the gullible and stupid. No reason intelligent people should have all the fun. Atrocious acting by Gyllenhaal. An embarrassment for Foxx and Woods. Really good sets, special effects and sound, but none of it matters when paired with a ridiculous script and cringe-worthy dialog.

Olympus Has Fallen did it better