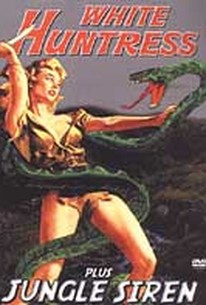 In this African adventure, two brothers head to Kenya to lead settlers through the dense jungle. Conflict arises when the two fall in love with the same woman, the daughter of a homesteader. The little band of settlers is eventually joined by a fugitive killer who, along with one of the brothers, tries to convince the travelers to change their plans and go off to find gold. No one is interested, so they set off on their own. In the end, they are killed by angry natives. ~ Sandra Brennan, Rovi

There are no critic reviews yet for White Huntress. Keep checking Rotten Tomatoes for updates!

There are no featured reviews for White Huntress at this time.