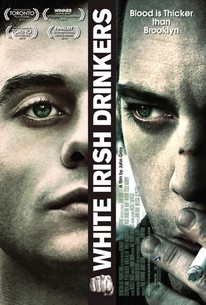 Two young men are looking for a better life but may have to go to the wrong side of the law to get it in this independent drama from director John Gray. Brian Leary (Nick Thurston) and Danny (Geoff Wigdor) are brothers living in a decaying Brooklyn neighborhood in 1975. Tired of dealing with their angry and abusive father (Stephen Lang) and high-strung mother (Karen Allen), both Brian and Danny want to move out and do something different with their lives, but their ambitions travel different paths. Danny, the older brother, is a petty criminal who is trying to finance a new life one hold-up at a time; Brian, meanwhile, works at a movie theater and paints in his spare time, though he doesn't tell anyone about his dreams of becoming an artist. Brian thinks he might be able to bankroll a few years at art school when Whitey (Peter Riegert), the manager of the theater, tells him they have a shot at booking the Rolling Stones for a special show at the theater, which would mean a big payday for everyone. But when Danny hears about the big show, he starts making plans of his own to rob the box office the night of the concert. White Irish Drinkers received its world premiere at the 2010 Toronto International Film Festival. ~ Mark Deming, Rovi

A movie that one watches with the sense of pushing it up a hill.

Despite the cliches that push every scene forward, there's an unexpected appeal to John Gray's modest drama, emanating from its center.

Here's a 1970s-set film nostalgic for the days young Irish-American men addressed each other as "ya' hump."

The basic outline of the plot, built around a promised local concert by the Rolling Stones - well, if you don't know where that story is headed, you haven't seen as many movies as I think you have.

Writer-director John Gray digs into his own background to create the ardent and atmospheric White Irish Drinkers. The close, cramped intimacy of this film is so real it stings.

White Irish Drinkers is a heavy borrower deep into the pocket of pop culture's loan shark, and lacking the grace to acknowledge the debt.

An indie gem for 2011, and a frontrunner for a Spirit Award in February, John Gray is right on the money with his own pot of gold -- White Irish Drinkers.

A period drama that's as predictable and cliched as green beer on St. Patrick's Day.

The dialogue and action in White Irish Drinkers couldn't be more on the nose if the film was intended to be a parody. Sadly, Gray means for us to take it seriously.

Under no circumstances would I recommend that you see "White Irish Drinkers." But if you do, a good, stiff belt would not be a bad idea.

Writer-director John Gray was blessed to find the faces of actors Thurston and Murphy.

I normally kind of like these sort of modest genre movies, but this is just marinating in its own mediocrity.

While Brian(Nick Thurston) does not mind accompanying his older brother Danny(Geoffrey Wigdor) on his jewlery robberies, he does draw the line at holding onto a gun for him. Otherwise, Brian uses art to distract himself from his abusive father(Stephen Lang) and his mother's(Karen Allen) idiosyncratic cooking and to meet women like Shauna(Leslie Murphy). For money, Brian works part-time at the moribund Lafayette Theatre where its owner Whitey(Peter Riegert) has just landed the Rolling Stones for a one hour concert which may yet save things. "White Irish Drinkers" is what we mean when we call a movie a mixed bag. On the one hand, you could occupy yourself by playing spot a cliche like brothers heading in opposite directions and incredibly prescient characters in a period piece.(However, one prediction turned out to be wrong since the movie was made.) In other ways, the movie takes full advantage of its time and place, like remembering old movie palaces in a time when New York City, not only Brooklyn, was going to the dogs, forcing many characters to choose between security and any dreams they might have.(What are the chances somebody would be reading the Daily News with the legendary cover, "Ford to NYC: Drop Dead?") To be honest, even if the movie had stopped after Brian's window painting, I would have recommended it, even without all the other cool moments. Plus, everything does neatly dovetail right at the end, rather unexpectedly. That's not to mention the fine work by the young cast, nor my eternal soft spot for Karen Allen.

In Brooklyn in the 70's there's only 2 kinds of people: those stuck there in lower middle class doldrums or those who get out. Although cliched the performances save this trifle about two brothers (one's a crook and one ain't). Stephen Lang does well as the bad parent.

Excellent movie! Refreshing script, excellent acting. I really liked the pace of this movie, and the subtle camera work. Fantastic ending, also, which often seals the deal for me when it come to really good movies. Kudos!

Cast: Nick Thurston, Geoff Wigdor, Karen Allen, Stephen Lang, Peter Riegert, Leslie Murphy, Zachary Booth, Robbie Sublett, Michael Drayer, Henry Zebrowski Director: John Gray Summary: In a blue-collar Irish section of 1970s Brooklyn, brothers Danny (Geoff Wigdor) and Brian Leary (Nick Thurston) come of age in a family dominated by their longshoreman father, Patrick (Stephen Lang), whose hard-drinking leaves them scrambling for a way out. As delinquent Danny and dejected mom Margaret (Karen Allen) take the brunt of Patrick's assaults, aspiring artist Brian hides his dreams. But desperate acts will threaten them all. My Thoughts: "Like so many other films, I went into this one knowing nothing. What I ended up with was a great indie drama. Great acting, great story, and some fun and also intense character's. It's such a heavy story dealing with some very serious issues of alcoholism and physical abuse. It was at times hard to watch or listen as some things were happening. But along with the brutality there was a lot of heart as well. You really start caring for these character's. The bond between these brother's is something special. Danny goes to great lengths to protect Brian. The film definitely brought laughter and some tears. Nick Thurston was charming and funny and just so likable that he reels you in. He did a great job in the movie. Geoffrey Wigdor as Danny was great as well. The whole cast was great. The critics hated it but I of course loved it. For me, it's a must see for sure."