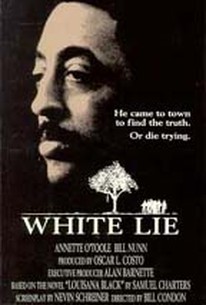 In White Lie, a drama based on Samuel Charters' novel Louisiana Black, Gregory Hines plays Len Madison Jr., a New York-based mayoral press secretary who learns that his father was lynched in the South three decades earlier. Madison returns to the South, where he is intent on learning the truth about his father's death. Along the way, he is helped by a doctor (Annette O'Toole), the daughter of the white woman whom Madison's father allegedly raped and killed.

Tom Even
as Stan Runzel

There are no critic reviews yet for White Lie. Keep checking Rotten Tomatoes for updates!

There are no featured reviews for White Lie at this time.