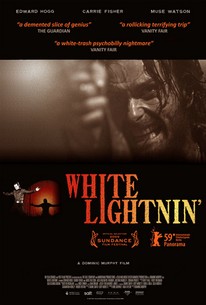 The colorful subject of the popular underground documentary Dancing Outlaw finds his outlandish life story adapted for the big screen in this biopic penned by Vice Magazine's Shane Smith and Eddy Moretti (Heavy Metal Baghdad), and directed by UK commercial veteran Dominic Murphy. West Virginia native Jesco White was just six years old when he started huffing gasoline and lighter fluid to get high. As a troubled adolescent young Jesco bounced between work camps and reform schools until the day his father, famed mountain dancer D. Ray White, taught him how to tap dance. That skill would prove indispensable in helping Jesco keep his wicked ways in check after his father is murdered and the demons come knocking. Lacing up his father's tap shoes and taking his show on the road, Jesco (Edward Hogg) eventually meets Cilla (Carrie Fisher), the woman he will eventually call his wife. But even true love can't prevent Jesco from being split by the double-edged sword of revenge and redemption, and for the man who craves both there is truly no peace. ~ Jason Buchanan, Rovi

Clay Steakley
as Reilly
View All

There's a crazy-dirty energy to White Lightnin' that's rarely seen in films, a raw beauty and awfulness that's both scary and exciting.

Dominic Murphy's pseudo-biopic is as visually assured as it is audacious, but behind the slickly edited imagery, the debutant's storytelling is exposed by shallow characterisation.

If you thought Deliverance was too subtle, too refined, too delicate, and that the hillbillies in it were far too much like characters from Jane Austen, then this is for you.

Seething with blighted fervour and over-ripe with religious wrath, the wild, elemental imagery generates something truly disturbing. With its strange religious overtones and inevitably fitful conclusion, White Lightnin' is elusive and bleak.

In White Lightnin', style and content meet, blend and writhe in the memory, a haunting nightmare.

From its bleakly comic beginning to its fire-and-brimstone ending, this artful trailer-trash quasi-biopic will set your heart pounding and your feet tapping.

A psychedelic, sepia-toned horror show, touring the dark corners of his mind and those of the white trash world in which he lives.

Not your conventional music biopic. In fact, it's increasingly hard to know what's fact or fiction about White's life as Murphy's film unfolds.

A surreal but searing biopic.

By far the best crazy,tap dancing,hillbilly drug movie of all time. Crazy independent movie that my brother told me to watch. Not for everyone,but I liked it.