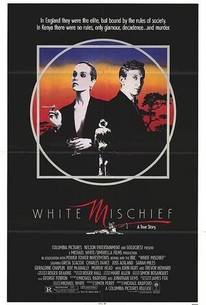 Based on one of the most scandalous murders in British history, White Mischief transpires in Kenya at a time just before the beginning of World War II. Jock Broughton (Joss Ackland) is a wealthy rancher who becomes taken with a young gold-digger named Diana (Greta Scacchi). Even though he is fully aware of her reasons for doing so, the pair wed. Broughton falls on hard times and loses his fortune. The hedonistic Earl of Erroll (Charles Dance) realizes this change of fortune may make Diana more open to engaging in an affair. One evening, Erroll is found murdered. Broughton is tried for the crime. Michael Radford would not direct again for seven years, but returned with the international hit Il Postino in 1994.

The film has been directed by Michael Radford (who also made the recent version of 1984), and he goes for atmosphere rather than plot. I think that is the right decision.

A vivid morality tale about the high cost of decadent narcissism.

There are no featured audience reviews yet. Click the link below to see what others say about White Mischief!