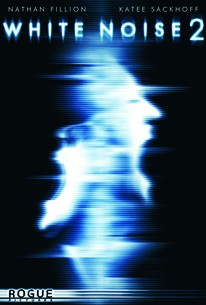 A man (Nathan Fillion) who watched the murder of his wife and child and had his own near-death experience develops the ability to identify people who are about to die and tempts fate when he tries to intervene. A pulse-pounder that never lets up until the frightening climactic scene. Katee Sackhoff, Craig Fairbrass, Adrian Holmes, Kendall Cross, William MacDonald. Directed by Patrick Lussier.

Insultingly bad at times, its only saving grace is the fact that director seems to be ever-so-slightly mental.

Expecting you to believe a lot while borrowing from many ghoulish sources, genre fans will find plenty to enjoy even if there isn't enough to love.

A great piece of supernatural filmmaking...

[T]he script does work in one good -- and by "good" I mean "cheap and implausible" -- Firefly reference...

A few cheap jolts, a handful of clever ideas, and just enough energy and creativity to make it across the finish line.

White Noise 2 is pretty much everything the original film wasn't: genuinely exciting, well made, competently acted, and contains a payoff that remains in the realm of easy digestion.

...Fillion's stellar work ensures that one can generally overlook the film's various inadequacies...

This one is better than the first one. I liked the ending.

Slightly better than it's predecessor, White Noise The Light has very little in common with it's older sibling. This time the film is more concerned with being exciting, creepy and disturbing. It mostly pays off. More of a super-hero movie, where Fillion can sense who is about to die. The film has a wonderful twist and plays on the idea of meddling in matters of fate. Unfortunately, there are just too many small moments of cheap/corniness. Had it not been made as a sequel to White Noise, it could have been more free to do it's own thing and have it's own style.

Its good not as good as the 1st one but watchable!

Silliness that tries to go a step further than the original by making Nathan Fillion the receiver of the images - with no explanation as to why. It was mostly predictable and lame, but Fillion is always fun to watch.