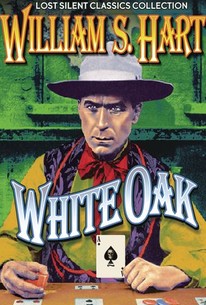 A gambler (William S. Hart) seeks revenge on the villain (Alexander Gaden) who ravished his sister (Helen Holly). The brute also attempts to, as an inter title puts it, "possess" the gambler's sweetheart (Vola Vale) and, still not satisfied, lecherously pursues the daughter of his partner-in-crime, an Indian chief (Standing Bear). Hart wrote the story himself, and the film reflects his, by 1921, slightly anachronistically stern view of the West. The great star was no longer the box-office draw of yore, his popularity usurped by more flamboyant, if not downright tongue-in-cheek, cowboys such as Tom Mix and Hoot Gibson. Hart released three more films in 1921 but none the following year and only one in 1923. He wound up his career in 1925, but on a high note: Tumbleweeds, a fascinating epic of the Oklahoma land rush. ~ Hans J. Wollstein, Rovi

There are no featured reviews for White Oak at this time.