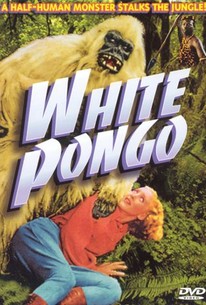 African explorers hit the Congo in search of a rare white gorilla in this campy jungle adventure filled with deliciously goofy special effects. The British biologists believe the white ape will prove to be the missing link. A British undercover cop accompanies the explorers because he believes the guide to be a killer. The cop's theory proves to be right and the guide soon causes the native bearers to revolt. He abandons the scientists to face the jungle alone. Before leaving, the guide kidnaps the expedition leader's lovely daughter. He then sets off to find some legendary gold. He ends up stumbling into the ancient home of the blonde ape. The primate doesn't like visitors and so strangles the killer and takes the hapless girl, her terrified bosom heaving seductively through her tattered blouse, to his lair. There the blonde ape must fight a regular gorilla. While the two muscle-bound hairballs fight it out, the undercover bobby and the scientists arrive. The white gorilla tosses his rival off a cliff and returns for some booty. Unfortunately, the explorers wound him and put him in a cage. They then return to England with their prize.

There are no critic reviews yet for White Pongo. Keep checking Rotten Tomatoes for updates!

Boring white people take an expedition deep into the dullest Africa looking for a boring white gorilla. This movie contends that white-coated gorillas are more intelligent and human-like than brown-furred gorillas. Very subtle.

I got this one in a 10 pack called Son's of Kong. This is a rather poor movie, Typical search for the mythical creature in the Jungle Movie. A group of White Men hire local tribesman to go deep in the Jungle to find the missing link who also might be the White Gorilla. Its hard to believe that King Kong was made in 1933 and the film quality and special effects were so much better. In beginning the white pongo passes up a native women and takes a chimp on the leash instead, pretty kinky if you ask me. Later on he looks in the bed room window of a young white beauty, hum that?s illegal in most states. In the end the White Pongo is capture and put in a cage and taken away. The White Gorilla is nothing more then a cheap costume rented off the shelves of a Halloween store I am sure. Do I have a life??? I am not sure after sitting through this one. I just hope the other 9 movies in this series is better.