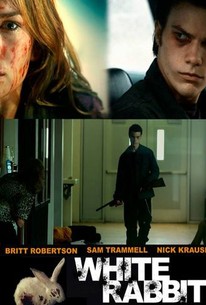 Harlon Mackey (Nick Krause) has been tormented by visions since his alcoholic father (Sam Trammell) forced him to kill an innocent rabbit while hunting as a boy. Now that Harlon is a bullied high school student, his undiagnosed mental illness is getting worse. He begins to hear voices and his imagination encourages him to carry out violent acts. Things begin to look up when Julie (Britt Robertson), a rebellious young girl, moves to town and befriends Harlon... But when she betrays him, the rabbit along with other imaginary comic book characters taunt him into committing one final act of revenge.

While it has some good performances and noble intentions, it doesn't really bring anything new to the conversation and ultimately fails to give viewers any compelling reason to wade through all the bleakness and misery that it has to offer.

It sometimes reads as a cheap, sleazy horror film, but its heart seems to be in the right place.

Neither screenwriter Anthony Di Pietro or director Tim McCann ("Desolation Angels") has a sure grasp of this uneasy mix of nature and nurture.

All too much of Tim McCann's drama about this disturbed loner comes to feel like a checklist of warning signs.

The emotional authenticity makes what could have easily been just another in a long line of similarly-minded dramas feel like a singular human story.

Fails to craft more than one-dimensional characters, making it impossible for the film to contribute to the difficult but urgent conversation about a terrifying topic.

A dull, insight-free portrait of a young teen who's driven to become a high-school shooter by all manner of clichéd forces.

White Rabbit simply doesn't arrive at a convincing diagnosis for Harlon, much less any insight into the culture that gives rise to killers like him.

Coming of Age films are among my favorite types of movies, but if you're a fan of the genre, you know there are often a lot of strange stories out there, perhaps none stranger than White Rabbit. This film follows Harlon Mckay (Nick Krause), who is a very strange kid, one that is often bullied. Harlon is very easily influenced by other people, as is evident by the scenes with his co-stars. When he's with his best friend, whose immature, they do kid things, and when he meets a bad girl, who doesn't stay in on place very long, Harlon gets into some trouble himself. There's no doubt that Harlon is strange, but so are the circumstances surrounding him. Newcomer Nick Krause plays the troubled lead and he really was terrific. In ninety minutes, this kid must of changed personalities a dozen times, and all of them were tremendous. White Rabbit is very weird, a little creepy, and nothing special until a shocking ending changes everything. Sometimes how you see a film can be changed by an ending that just blows the mind and answers a million questions at once. That is what happens here, and that is the only reason I recommend watching this film. As I've been saying, it's really strange and some parts are hard to sit through, but in the end, you'll be left thinking about what you just saw and wondering about each and every scene. Honestly, it's the kind of film you really need to see more than once if you're hoping to catch everything.