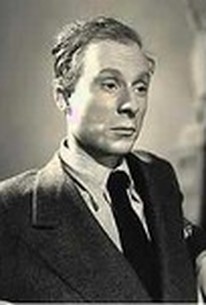 tracing the actor/director's 70 years as an entertainer: performing vaudeville as a child, helping Welles launch his Mercury Theatre Company, surviving the blacklist and directing programs during TV's explosive early years. Most recently, Lloyd was a featured actor on "St. Elsewhere" and starred in 2005's "In Her Shoes." And Lloyd, a former tennis rival of Charlie Chaplin's, still plays three times a week. Lloyd's story is one of survival, creativity and endless inspiration.

Critic Reviews for Who Is Norman Lloyd?

Pic's portrait of a collaborative artist whose contributions are as pervasive as they are unsung swims valiantly against the name-recognition tide.

There are names that fill in the cracks of Hollywood myth, and Norman Lloyd's story seals several gaps.

I'm still not convinced that Norman Lloyd "should" be a household name.

Captures the joy of the man as he talks about working in the '30s with stage directors like Elia Kazan and Joseph Losey, or playing tennis with Chaplin under the bright L.A. sun.

There are no featured reviews for Who Is Norman Lloyd? at this time.

Who Is Norman Lloyd? Quotes