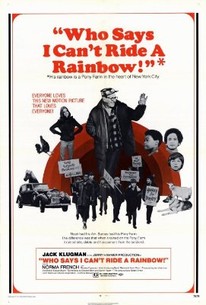 This upbeat children's adventure tells the true story of gentle Barney Marcovitz who firmly believes that the world's hope is in the hands of children. Barney manages a pony farm/petting zoo in Greenwich Village so that city kids can sample country life. The trouble begins when the real estate developers who own his property want to put up a housing complex. The irate neighbors rally on behalf of Barney's zoo, but the developers won't listen. The defeated zoo keeper then gives his animals to the local kids. Mayhem ensues, especially with two children who try to keep their new pony a secret from their parents. In the end, all is saved when Barney moves his menagerie to the Bronx.

Val Avery
as The Marshal

Skitch Henderson
as Himself

Heather MacRae
as Herself

Otis Stephens
as Himself

Critic Reviews for Who Says I Can't Ride a Rainbow! (Barney)

Neither the relationship, nor the kids, nor even the animals gets handsome enough treatment to redeem Who Says I Can't Ride a Rainbow! from general mediocrity.

The film's potential for sentimentality is high, but luckily the filmmakers never stoop to the obvious, and the result is a warm-hearted, if rather slow-moving, tale.

There are no featured reviews for Who Says I Can't Ride a Rainbow! (Barney) at this time.

Who Says I Can't Ride a Rainbow! (Barney) Quotes