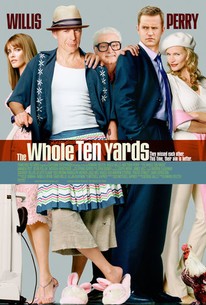 Critics Consensus: A strained, laugh-free sequel, The Whole Ten Yards recycles its predecessor's cast and plot but not its wit or reason for being.

Critics Consensus: A strained, laugh-free sequel, The Whole Ten Yards recycles its predecessor's cast and plot but not its wit or reason for being.

Critic Consensus: A strained, laugh-free sequel, The Whole Ten Yards recycles its predecessor's cast and plot but not its wit or reason for being.

Bruce Willis and Matthew Perry reprise their roles as a killer for hire and a dentist with a bad case of nerves in this sequel to the comedy hit The Whole Nine Yards. Former hitman Jimmy "The Tulip" Tudeski (Bruce Willis) has retired from his life of crime and is living a quiet life of cooking and housekeeping in Mexico, despite the fact his wife, Jill (Amanda Peet), a would-be hired killer, still wants to keep her hand in the business. Tudeski has been able to convince the authorities he's dead thanks to dental records falsified by his former neighbor Nicholas "Oz" Oseransky (Matthew Perry), who lives in Los Angeles. But Oseransky discovers that not everyone is fooled by Tudeski's handiwork when his wife, Cynthia (Natasha Henstridge), is kidnapped by Lazlo Gogolak (Kevin Pollak) and his goons. Gogolak is a high-ranking member of the Hungarian mafia, and Tudeski previously murdered his son, so he's abducted Cynthia in order to get Oseransky to reveal the hired killer's current whereabouts. But Tudeski has come to like the quiet life, and isn't so sure he wants to face Gogolak and his crew for the sake of a jittery dentist who once did him a favor. Most of the principle cast of The Whole Nine Yards returned for this sequel, though director Howard Deutch stepped in to replace Jonathan Lynn, who was working on The Fighting Temptations when The Whole Ten Yards went into production.

George Zapata
as Guy in Trunk No. 1

Carlo Zapata
as Guy in Trunk No. 2

Carl Cairfalio
as Goon No. 1

Doc Duhame
as Goon No. 2

Buck MacDancer
as Goon No. 3

Monte Perlin
as Goon No. 4

Brad Orrison
as Goon No. 6

Ned Bellamy
as Man In Diner

Lily Kravets
as Birthday Guest No. 1

Jessica Flaherty
as Birthday Guest No. 2

Caitlin Morrison
as Birthday Guest No. 3

Franck Pesce
as Policeman No. 1

Robert Rusler
as Policeman No. 2

Dusan Fager
as Stand In For Jimmy

Jon Donahue
as Stand In For Oz

Debbie Atkinson
as Stand In For Jill/Cynthia
View All

This appalling mess of a movie just isn't funny.

Every joke is stretched to the breaking point, and no one seems to be having any fun.

The script is so bland it barely musters a whole ten laughs.

Inconsistencies in tone are minor when compared to the confusion created by the editor's butchery.

A heavily made up Kevin Pollak -- (over)playing a Hungarian gangster -- best sums up the mood: 'Thees ees reminding me of my favoreet soup opera.'

This time the situations are forced, the punchlines are flat and the actors are more like caricatures instead of actual characters.

Unfunny, badly acted, and made solely for the purposes of big paychecks this film is just utterly embarrassing and nonsensical. This is mindless drivel, without being able to call itself a guilty pleasure.

Proof that most sequels should be avoided, "The Whole Ten Yards" vaporizes the humor of its superior 1999 precursor.

Mostly overacted and overblown, the script tries to make 'outlandish' into outrageous but hardly ever manages it. Missing is the element of some discernible sense of reality that is essential to black comedy.

While most sequels have nowhere to go, this sequel has nowhere it wants to go, and while most movie failures are unoriginal, this mess is simply uninspired.

If you saw The Whole Nine Yards then you will probably love the The Whole Ten Yards..this movie is fun and fast paced and doesnt evn make any sense half the time but who cares its funny..but then i do have a funny silly sense of humor! Perry and Willis are a great combination and I think they add and change the story at will . In some ways, this chapter of their lives finds Jimmy and Oz switching some aspects of their original roles

The gang get together again to get more money. Not as interesting as first movie but still quite funny. Good cast.

They missed each other. This time, their aim is better.