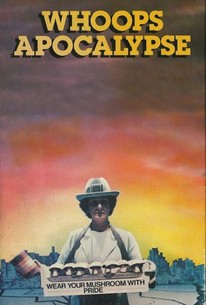 Tipping the scales on the Monty Python-esque side of broad comedy, this outrageous and classically British farce is a series of episodes involving the U.S., a small Caribbean nation, the British government, and the military. The American president is a former clown who dies after asking someone to punch him in the stomach to prove how strong he is. The vice-president (Loretta Swit) takes over and heads for trouble right away. A British island has been invaded by a Caribbean dictatorship and the gay British admiral sent to command naval operations takes a warm-hearted, 1940s-style leave of his "spouse." A Princess working as a nurse overdoes it when asked to shave a sailor for an operation. The British Prime Minister decides that if the unemployment situation could be easily solves if the employed would only jump off a cliff. And so it goes on and on, with some of the skits delving into more violent and sacrilegious themes.

There are no critic reviews yet for Whoops Apocalypse. Keep checking Rotten Tomatoes for updates!

There are no featured reviews for Whoops Apocalypse at this time.