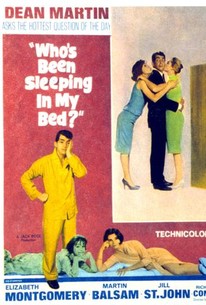 This romantic adult comedy finds psychiatrist Jason Steel (Dean Martin) the leader of a women's group therapy session. Jill St. John, Elizabeth Frazier, Macha Meril, Yoko Tani and Diane Foster all seek the advice of the handsome doctor, while husbands Louis Nye, Jack Soo, Richard Conte, and Martin Balsam ignore them in their usual poker game every Wednesday night. Jason plays doctor with pretty fiance Melissa (Elizabeth Montgomery) and Carol Burnette is his scatter brained secretary who does a hilarious striptease when she and Melissa can't pay for their dinner at a local nightclub after being stuck with the bill.

Critic Reviews for Who's Been Sleeping in My Bed?

There are no critic reviews yet for Who's Been Sleeping in My Bed?. Keep checking Rotten Tomatoes for updates!

Audience Reviews for Who's Been Sleeping in My Bed?

Typically sexist and silly 60's comedy that's really not very funny does offer the pleasure of seeing two of the queens of television, Elizabeth Montgomery and Carol Burnett, together in the same film. They're fine together and Carol has her moments, otherwise this is forgettable fluff with Jill St. John looking great wasted in a stupid part.

Who's Been Sleeping in My Bed? Quotes