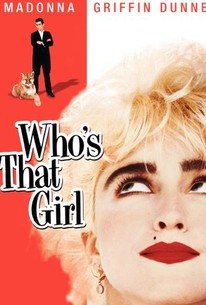 Who's That Girl? Photos

A year after appearing in the box-office sleeper Shanghai Surprise, pop superstar Madonna starred in the screwball comedy Who's That Girl? She plays Nikki Finn, who is being released from prison after serving a four-year sentence for a murder she didn't commit. Meanwhile, wealthy lawyer Loudon (Griffin Dunne) is about to get married that afternoon to the snobby Wendy (Haviland Morris), the daughter of Simon Worthington (John McMartin). Worthington does not approve of the wedding and he wants Nikki out of town as soon as possible, so he sends Loudon to collect Nikki and take her to the bus station. Instead, the flamboyant Nikki seeks her revenge while trying to find out what happened to her friend Johnny, which causes Loudon a lot of trouble. Naturally, wild action ensues -- some of it involving an escaped Cougar belonging to Loudon's boss, the millionaire animal collector Montgomery Bell (John Mills) -- and Loudon having to choose between the prim Wendy and the unpredictable Nikki.

Jinaki
as Lady on Bus

Murray the Cougar
as Murry
View All

Critic Reviews for Who's That Girl?

'Who's That Girl' is so eager to please, it ends up being a very hard movie to hate. Sure, it's formulaic and overcooked, but it's ultimately a pretty typical '80s comedy, no better or worse than average.

Before Foley loses the film to insipid humor and excessive physical comedy -- in a rambunctious wedding fiasco at the film's close -- he is nevertheless successful at creating minor characters that are undeniably appealing.

Really, Madonna is the draw of this film. If you don't see what the big deal is with this pop superstar, then stay clear of this movie.

The storyline is simply bizarre, but somehow all the crazy elements fall together in one appealing madcap frolic in this 1987 Madonna vehicle that ends up being more than the sum of its parts.

This patently painful flick marks the first and last time that director James Foley would tackle comedy. And the reasons why are right up there on the screen.

At least Shanghai Surprise was nice to look at and had some George Harrison songs.

Audience Reviews for Who's That Girl?

Horrible. Madonna is out acted by a cat and acts like a 10 year old child with a learning disability all through this.

It is just a crappy movie. Don't watch it. I give the movie a half a star, and the two cougars their own half-star.

OK as a daytime family friendly movie. Nothing extraordinary about it. Madonna did a okay job. The story is about what you could expect out of it.

This movie is fun but much too silly at times too. Madonna is okay, but an actress could have done a better job with this movie, I think. Anyway, this movie is a joy for any fan of hers. If you're not a big fan, it's just okay.

Who's That Girl? Quotes