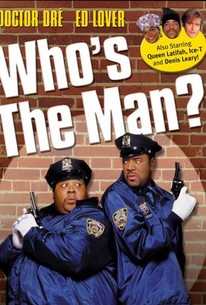 Who's the Man? Photos

In this comedy, bumbling Harlem barbers Dr. Dre and Ed Lover are shipped off to the police academy by their frustrated boss, Nick (Jim Moody). However, when a crooked land developer threatens to forcibly take over their ex-boss' land, it is up to Dr. Dre and Ed to use their new-found police powers to stop him. A number of well-known rap artists make appearances in this film, including Queen Latifah, Humpty Hump, Kriss Kross, B-Real, and Ice-T.

Ed Lover
as Himself

Dr. Dre
as Himself

Doctor Dré
as Himself

Andre B. Blake
as Lamar

Todd I.
as Shorty

Fab 5 Freddy
as Himself

Smooth B.
as Bubba Worker 2

Garfield
as Customer in Chief

The Guru
as Lorenzo

Flavor Flav
as Himself

John A. MacKay
as Captain Paggio

Heavy D
as Himself

Queen Latifah
as Herself

Paul A. George
as Club Guy 2

No Face
as Guy at Bar
View All

Critic Reviews for Who's the Man?

A lot of the humor, though, seems to spring from the personalities and relationships of Dr. Dre and Ed Lover themselves, who, like Cheech and Chong and Laurel and Hardy and the teams mentioned in the movie, have an easy chemistry.

Billing itself as the first hip-hop whodunit, Who's the Man? can be best appreciated by hardcore rap fans, who can chuckle at the sight of their idols in Harlem version of Around the World in Eighty Days.

I don't want to give this film a bad 'rap'...but it really does suck

Audience Reviews for Who's the Man?

Who's the Man? Quotes