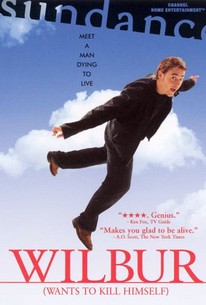 Critics Consensus: Despite its morbid subject matter, Wilbur is a charming and often funny film.

Critics Consensus: Despite its morbid subject matter, Wilbur is a charming and often funny film.

Critic Consensus: Despite its morbid subject matter, Wilbur is a charming and often funny film.

Danish filmmaker Lone Scherfig, the writer and director of the 12th Dogme 95 film, 2000's critically acclaimed Italian for Beginners, presents this comedy drama starring Jamie Sives and Adrian Rawlins as brothers Wilbur and Harbour. When their mother died early in their lives, it became up to Harbour to keep tabs on Wilbur, the younger and chronically depressed of the two siblings. Now in their thirties, their father has passed away, leaving them to take over the family's used book store. It is there that they encounter Alice (Shirley Henderson), a hospital janitor who sells the books that patients leave behind, and her young, optimistic daughter, Mary (Lisa McKinlay). Together, the four form a bond that changes each of their lives, with Harbour falling in love with Alice and Mary's sunny demeanor giving the suicidal Wilbur a reason to live. The first English-language effort from Scherfig, Wilbur Wants to Kill Himself was nominated for best film at Denmark's 2003 Bodil Awards.

Des Hamilton
as Butcher
View All

News & Interviews for Wilbur Wants to Kill Himself

View All Wilbur Wants to Kill Himself News

Critic Reviews for Wilbur Wants to Kill Himself

Scherfig shows a flair for comic melancholy ... as well as eccentric characters like Wilbur, who initially comes across as off-putting and self-obsessed, but later becomes, if not exactly warm, at least sympathetic.

Wilbur has the ability to suck you in, to make you cheer on the strangest of indulgent families.

Though Scherfig is still partially enrolled in the Dogme school, her movie finds a happy balance with its equally adept eye for wide-screen composition and the raw complexity of real human emotion.

With the portrait of the suicidal lover, Scherfig searches for an irony that loses its ingenuity when the melodrama makes sense and leaves the main text in a kind of reductionist void. [Full review in Spanish]

What's most intriguing about director Lone Scherfig's first post-Dogme 95 feature, the admittedly appealing Wilbur Wants to Kill Himself, is where and how it falls short.

A nice little love triangle drama-comedy about suicide and bookstores.

...the kind of picture one is more inclined to admire than embrace

Lone Scherfig has masterfully combined rather dark, serious topics with a little humor and a lot of humanity.

Audience Reviews for Wilbur Wants to Kill Himself

Well, this was definitely a surprise! Dark, yes. Comedy, not so much. Really fantastic writing, and the slow development of characters that aren't contrived or condescending. Even as tired as I was while watching this, I could not stop watching. I found this story mesmerizing....well done.

Mixed feelings on this one. On one hand, very original story and well cast (even Shirley Henderson is very good here. Not nearly as "screetchy" as normal - I am sure she puts that voice on!), also quite funny in a dark way thanks to Julia Davis (I can never take her seriously. I just see Jill from NIghty Night whenever I see her!). There was just something about the story itself that didn't sit quite right with me. It seemed horrible for Wilbur and Alice to be carrying on behind Harbour's back, and then the final scene seemed disrespectful to Harbour. I don't want to spell it all out and ruin it for those who have not seen this, but those who have will know what I mean. Perhaps I am missing the point, I am not sure...

One of the most bizarre films I have ever seen. Not that it's surreal per se, just... very odd. It's touching, well acted, nicely scored, but it's also all over the place and if there was a point to be made - and it felt like there shold be - I didn't get it. Unless it's that suicide is bad.

Wilbur Wants to Kill Himself Quotes