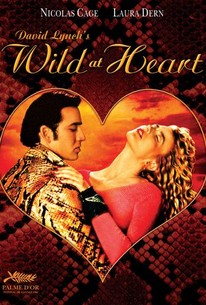 Critics Consensus: One of director David Lynch's more uneven efforts, Wild at Heart is held together by his distinctive sensibilities and compelling work from Nicolas Cage and Laura Dern.

Critics Consensus: One of director David Lynch's more uneven efforts, Wild at Heart is held together by his distinctive sensibilities and compelling work from Nicolas Cage and Laura Dern.

Critic Consensus: One of director David Lynch's more uneven efforts, Wild at Heart is held together by his distinctive sensibilities and compelling work from Nicolas Cage and Laura Dern.

Lovers on the run from an angry mother, a private detective and a hit man, encounter a plethora of grotesques and stop for plenty of explicit sex.

Sherilyn Fenn
as Girl in Accident

Nicholas Love
as Man in Wheelchair

Koko Taylor
as Singer at Zanzibar

Tracey Walter
as Roach (uncredited/cut out)

Shawne Rowe
as Waitress (uncredited/cut out)
View All

Critic Reviews for Wild At Heart

Perhaps the major problem is that despite Cage and Dern's best efforts, Lynch is ultimately interested only in iconography, not characters at all.

There's a spontaneous, anything-can-happen feeling to it that's the primary appeal of any road movie.

Even the title is a letdown, somehow.

Not for the weak of heart, one of the best Lynchian outings with some fantastically memorable dialogue.

I have a hard time focusing during Lynch's films, but so many of Wild at Heart's extreme scenes stick with me.

I enjoyed it more back in 1990, though I'd be hard-pressed to recall exactly why -- viewing it now, it's only a marginally satisfying experience, with some potent set-pieces diluted by an almost juvenile predilection on Lynch's part.

There is no denying the fun to be had with Wild at Heart. Its irresistibly charismatic leads draw you into Lynch's anything goes, 50s-inflected nightmare with an ease and insanity that's unlike anything put to film before or after.

I don't think at all that 'Wild Heart' is one of the great works of David Lynch, but I must say it is a wildly entertaining road movie about love, passion and freedom. [Full review in Spanish]

Most of the time it's unquestionably disturbing, but every so often a hint of deeper meaning pokes through the strangeness.

A non-stop fun-fest that doesn't have tried to be groovy, but goes to great pains to make sure things stay that way.

Audience Reviews for Wild At Heart

A good, but not terrific film. Very interesting surrealist road movie, but exist others David Lynch's film that deserve the Golden Palm.

Startling images, hilarious dialogue and brilliant performances. This is one of Lynch's best. Cage and Dern shine as two lovers on the run but the real scene stealers come from Willem Dafoe as Bobby Peru and especially Diane Ladd as Lula's insane mother.