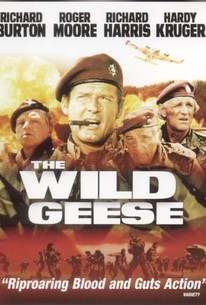 In this action film, a group of mercenaries, lead by Colonel Allen Faulkner (Richard Burton) are hired by a wealthy British businessman to invade an African country and restore the former leader to power in order to secure British business arrangements.

Clive Curtis
as Randolf
View All

Critic Reviews for The Wild Geese

The Wild Geese is a crackerjack adventure in the Navarone tradition -- wry, involving, suspenseful.

Each actor seems to be trying to make it clear to us that he holds the screenplay in more contempt than the other two.

"The Wild Geese" watches like a precursor to "The Expendables", following a gang of mercenaries played by high-profile British actors of the age.

For fans of such men-on-a-mission flicks like The Guns of Navarone and Where Eagles Dare, this is a gripping piece of entertainment.

When you're in the mood for a high-caliber, top-notch Brit action film, you can't do much better than "The Wild Geese".

Audience Reviews for The Wild Geese

A big, spectacular and explosive good time for two hours. It's smart, very funny and loaded with non-stop action. A classic action movie that you cant help but love. It's a thrilling and endlessly enjoyable British version of The Expendables. It's packed with action, humor, and a large list of British stars that all delivers the goods. I loved this film. Richard Harris, Roger Moore and Richard Burton are excellent together, they are the perfect combo of wit, attitude and heart. Movies like this are rarely made anymore but its nice to look back and see where our heroes of today were inspired from our heroes of back in the day.

Wild Bunch vibe, with a british flavour. In many ways this has the soul and form that was lacking in The Expendables. British people truly are more badass by default.

An action war thriller which takes the best parts of the Dirty Dozen, the Dogs of War and others and rolls them into this hectic flick with more than a touch of style and throw in a star leading cast and yep, it works! One of the best war action movies Ive seen, they sure dont make them as they used to! Meet the Wild Geese, a mercenary group hired to rescue an exiled African president for a British CEO whose interests lie in the Presidents country's copper mines, an obvious plot of treachery and deception afoot. But when things go astray, the Wild Geese decide if they are going to die, they will die hurting those who betrayed them where it hurts - and crossing these men will come at a high price as the CEO and the African dictators' army will find out the hard way. Its smart, a great script, some great humor and near realistic action scenes, its not a movie with all the huff and fluff of Hollywood, but a geunine near reality based movie, so no fancy computer imagery or such, just nice raw cinema at its best. Yep, defintley a war movie to watch!