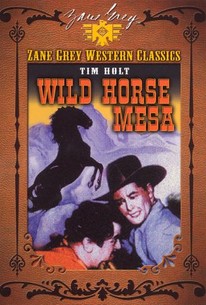 Square-jawed Jack Holt and ornery Noah Beery were the stars of Paramount's popular Zane Grey adaptations. Their best efforts were probably their first two films, the epic Wanderer of the Wasteland and North of 36 (both in 1924). Although lesser in scope, Wild Horse Mesa was filmed on breathtaking locations in Colorado and featured a herd of beautiful wild horses. Holt plays Chayne Weymer, who is obsessed with capturing Panguitch, king of the wild stallions. He is opposed to the local ranchers' use of barbed wire, and an epic fight ensues. Wild Horse Mesa is best known today for featuring a brief performance by Gary Cooper, who also appeared, again very briefly, in Paramount's following Grey Western, The Enchanted Hill (1926).

Tom Tyler
as Cowboy
View All

There are no critic reviews yet for Wild Horse Mesa. Keep checking Rotten Tomatoes for updates!

There are no featured reviews for Wild Horse Mesa at this time.