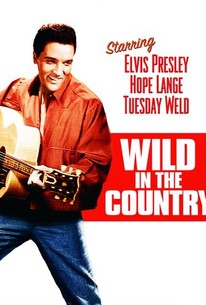 Wild in the Country Photos

Rock 'n roll king Elvis Presley stars as Glenn Talbot, a country boy with a problem temper and a yen for literary greatness in this typical Presley vehicle directed by Philip Dunne. After Glenn is sent packing by his father for mixing it up one too many times with his brother, the court makes him a ward of his uncle. His inner turmoil leads him into therapy with the older and very attractive Irene (Hope Lange), a patient-doctor relationship that is misconstrued by their small town. The two spend a platonic night in the same room in a motel, but no one is believing it was innocent. Glenn's romantic interests include Noreen (Tuesday Weld), with whom he shares a drink or two or more, and a song, and Betty Lee (Millie Perkins). Between the singing and carousing and fist fights, it still looks like a happy resolution looms large on the horizon. ~ Eleanor Mannikka, Rovi

Will Corry
as Willie Dace

Will Cory
as Willie Dace

Critic Reviews for Wild in the Country

Presley holds nothing back with his untamed performance

With its incestuous 'Peyton Place' plot, out-of-wedlock baby and Tennessee Williams hothouse atmosphere, this is Elvis's most adult movie...

A script that looked good on paper but when it came time to produce it, things came apart more than they came together.

"That the picture doesn't yield to convention in the final minutes--where it counts--won me over."

Audience Reviews for Wild in the Country

It's soap opera but so far above the usual junk Elvis was given to work with with costars, Hope Lange and Tuesday Weld, who can actually act that it seems entirely removed from them. Not his best film, that would be King Creole, but enjoyable.

Wild in the Country Quotes