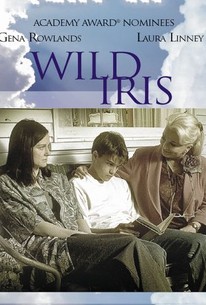 Adapted for television by Kent Broadhurst from his own stage play +Black Iris, Wild Iris takes place in a small Kansas town, where sixty-something Minnie Brinn (Gena Rowlands) runs Bluebird Bridals, a successful boutique. Minnie's chief seamstress and designer is her alcoholic daughter Iris (Laura Linney), who has still not completely recovered from the suicide of her husband Ronnie Bravard (Scott Gibson) eight years before. Since that time, Iris has lived with her domineering mother, who never lets a day go by without making her daughter feel useless and unworthy. Minnie's browbeating and Iris' boozing is having a deleterious effect on Iris' 15-year-old son Lonnie (Emile Hirsch), who is increasingly turning to local filling station owner Lud Van Eppy (Lee Tergesen) for friendship and advice. By the time Lud senses the warning signs that Lonnie is heading down the same self-destructive path as his father, it may be too late for all concerned. Ramando (Miguel Sandoval), Minnie's wedding-photographer pal, and Errol Podudney (Fred Ward), the flustered father of a seriously pregnant teen-aged girl, provide levity in contrast to the otherwise serious goings-on. Filmed in Ontario, Wild Iris premiered theatrically in Orlando, FL, a week or so before its "official" Showtime cable network debut on August 5, 2001.

Ingrid Veninger
as Woman in Line

To be seen only for the performances of these extraordinary actors, including Miguel Sandoval as a photographer and Lee Tergesen as the owner of the filling station.

With lesser actors on display, I shudder to think at how shrieky and pandering this production could have become. Fortunately, this one stars Laura Linney and Gena Rowlands.

There are no featured reviews for Wild Iris at this time.