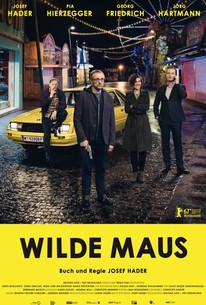 When 50-year-old George loses his job as music critic with a Vienna newspaper he conceals the fact from his younger wife Johanna, who wants a child with him. Instead, he embarks upon a campaign of revenge against his former boss, which starts out as minor acts of vandalism but soon escalates into far more serious escapades. He spends his days in the Wurstelprater amusement park, where he runs into Erich, the bully who made his life a misery at school many years ago, now also unemployed. Together with Erich and his Rumanian girlfriend Nicoletta, George begins to renovate an ancient roller-coaster. Within just a few days his life goes completely off the rails.

This genial farce deals in familiar and occasionally glib material, but with a redeeming undertow of self-deprecating humor.

With personalities never going deeper than what's expected in a mild comic sketch, and believability held in that limbo space reserved for exaggerated comedies, the film has little chance outside German-speaking territories.

Writer, director and star Hader ensures his portrait of a man in disarray is haunted by the paths both taken and ignored.

It is a real pity that the intelligence of its first scenes and even its first half hour aren't sustained through the whole film. [Full review in Spanish]

The plot gradually falls apart into a series of sketches whose points are often dulled by self-indulgence, thin characters or a lack of dramatic coherence.

Although it is obviously supposed to be a comedy, the film is only unfunny and unforgivably dull, suffering mainly from a glaring lack of structure and with too many characters in a plot that doesn't know what to do with them nor has any idea where it wants to go.