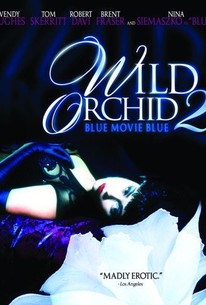 All poor Blue really wants is to be a regular, suburban Southern California teen from the 1950s, with a boy friend and lots of normal friends. Unfortunately, Fate has other plans. This erotic drama (related to it's predecessor in name and director only) chronicles her experiences. Blue's father is a heroin-addicted jazz musician and her estranged mother is a hooker. The trouble begins when her father, Ham, runs out of heroin and gets too upset to play. Blue procures him a fix, but when he learns that she sold herself to the club owner to get it, he drops dead of shock. Blue continues working at the club, but she is no great shakes in the sex department and the club owner sells her to an upscale brothel that caters to high-ranking government officials. On one of her days off, she meets a handsome young man outside a church. Josh is everything she dreams of, clean-cut and kind. Unfortunately, she cannot tell him of her true profession and they must separate. Blue is despondent and makes a lousy call girl. To try and liven her up a bit, a senator hires her for a private gang bang. He films the festivities, but fortunately, just before she is raped by the depraved politicians, her chauffeur, Sully, who has become her friend, rushes in to save her and they leave town. Eventually they end up in Josh's town. She and Josh fall in love. Unfortunately, the irate madame has come looking for her. To break them up, she show's the young football captain the politician's video-tape of his girlfriend in action.

Michael Villella
as Man With Mona

Michael Villela
as Man with Mona

Cindy Lair
as Girl in Brothel

Sigal Diamant
as Girl in Brothel

There are no critic reviews yet for Wild Orchid 2: Two Shades of Blue. Keep checking Rotten Tomatoes for updates!

Another hooker with a heart of gold story.

This is definitely a best film from the Zalman King collection. One has to wonder what ever happened to the actor Brent Fraser.