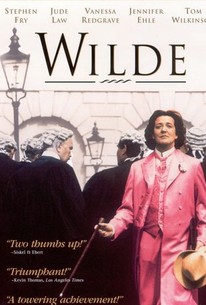 The life of Oscar Wilde, at least that part pertaining to his sex life, Lord Alfred Douglas and his ruinous trial for indecency.

Tom Wilkinson
as Marquess of Queensberry

Bob Sessions
as Mine Owner

Joseph May
as First Miner

A tony biopic that manages to combine an upfront portrayal of the scribe's gayness with an often moving examination of his broader emotions and artistic ideals.

If anybody was born to play Oscar Wilde, it must have been Stephen Fry: not only does he look like the Green Carnation Man, but he himself is often portrayed as being too clever, too complex for his own good.

Likely to remain the definitive screen treatment of Oscar Wilde for years to come.

The closest thing the movie has to a point of view is a tendentious and mystifying voice-over, in which Fry reads excerpts from Wilde's fairy tale about a selfish giant who banishes his children from his garden.

Stephen Fry brings a depth and gentleness to the role that says what can be said about Oscar Wilde: that he was a funny and gifted idealist in a society that valued hypocrisy above honesty.

Wilde examines the nature of love, its obsessiveness, self-abnegation, generosity, blindness, and transcendence.

British actor Fry is such a natural fit as the intelligent, witty dandy, Wilde, that when his casting was secured, the makers of this biopic must have known their work was pretty much done.

Stephen Fry is extraordinary as Oscar Wilde, but the movie lacks balance and finesse and comes across as a TV movie of the week.

There's never been a better story about the misadventures of one of the world's greatest writer. Fry should have been Oscar nominated, and Law is equally electrifying.

Julian Mitchell's script freely doles out all kinds of pithy, self-conscious bon mots among its cast, but doesn't bother to flesh out convincingly the emotional conflicts and dramas in which the characters find themselves.

The acting was good, but Jude Law's character is so whiny and hateful, it's almost like watching two hours of an abusive relationship.

A melodrama with a wonderful portray of Wilde, but lacking the signature Wilde wit. Fry is genius, Law is less than desirable

Biopic of a genuis, starring a genius.