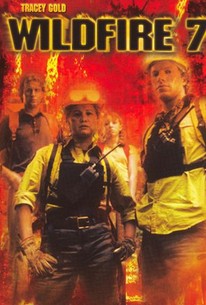 Tracey Gold stars as Nell Swanson, unjustly convicted of murder and serving a long prison sentence. In order to secure a parole, Nell agrees to join a tough forest firefighting unit, having been trained for such dangerous work while "in stir." Among her new colleagues is an abrasive Brooklynite (Ellen Dubin), a stalwart Native American (Nathaniel Arcand), and the ill-tempered "smoke eater" (Alexander Walters) with whom Nell had trained. In a rapidly paced climax, Nell not only must parachute into a raging forest conflagration, but must also rescue her own long-estranged daughter. Filmed on location in British Columbia, Wildfire 7: The Inferno debuted (with an astonishing lack of publicity) on the PAX network on November 1, 2002.

Martin Christopher
as Nick
View All

Critic Reviews for Wildfire 7: The Inferno

There are no critic reviews yet for Wildfire 7: The Inferno. Keep checking Rotten Tomatoes for updates!

There are no featured reviews for Wildfire 7: The Inferno at this time.